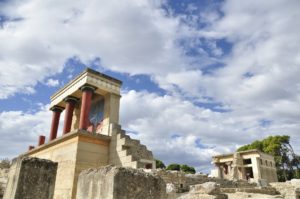 The Minoan Civilization was an Aegean Bronze Age civilization on the island of Crete and other Aegean islands. It flourished from around 2600 to 1600 BC and ended around 1100 BC. There’s even evidence of the civilization’s existencestill standing today, especially on the island of Crete. For instance, the Knossos Palace is a classic example of Minoan architecture and you can visit it during your time in Greece!

Here’s what you need to know about the Minoan Civilization:

The Bronze Age began on Crete around 3200 BC. During the late third millennium BC several locations on the island became hubs of commerce and handiwork. This allowed the upper classes to exercise leadership and expand their influence. Around 1700 BC there is thought to have been an earthquake or an invasion from Anatolia. Whatever it was destroyed the palaces at Malia, Knossos, Phaistos, and Kato Zakros. These palaces were later rebuilt on a larger scale and new settlements were built across the island. Around 1600 BC there was an eruption of the Thera volcano. Then, around 1450 BC, the Mycenaeans (the Greeks of the mainland)invaded and conquered Crete.

During the Minoan Civilization cattle, sheep, pigs, and goats were raised. The Minoans grew poppies to use for seed, and possibly foropium.  The Minoans also domesticated bees.Additionally, they cultivated olives, figs, and grapes. Some vegetables that grew wild on Crete included: carrots, lettuce, asparagus, and celery. Seafood was an important part of the Minoan diet as well. Though now extinct on Crete, during the Minoan Civilization wild deer and boar were also consumed. Farmers would use wooden plows to pull donkeys and oxen. Tools were made of wood or bone and bound to handles with leather straps. The Minoans developed oval-shaped holes in their tools to fit oval-shaped handles, which prevented spinning.

There areonly a small number of records found relating to Minoan language and writing, but clay tablets dating back to 3000 BC were found with Aegean scripts. Clay cups of Knossos were found with remnants of ink. The earliest writings to be found on Crete were Cretan hieroglyphs, but it’s not clear if it was a Minoan language. Linear A is a known, but still undeciphered, script of the Minoan Civilization.

Minoan cities were connected by paved roads that were drained. The upper-class Minoans even had water and sewage facilities, which were made with clay pipes. Minoan buildings had wood, plaster, or flagstone floors and flat, tile roofs. Buildings often stood two or three stories high. Villas and palaces were made of limestone, sandstone, and gypsum.

Using imported gold and copper, the Minoans would create elaborate metalwork. They made bead necklaces, bracelets, and hair ornaments. Minoan ceramics would often be decorated with spirals, triangles, crosses, curved lines, and fish bones. During the late Minoan period flowers and animals were still characteristic, but there was much more variety included. The Minoan use of the sea in artistic motifs would be continued on by the Mycenaeans.

The Minoan civilization had a huge influence on the rest of Greece. Their art, religion, and culture all seemed to have been adapted by the Mycenaeans; and even their economic system and bureaucracy were used after the Minoan Civilization ended.