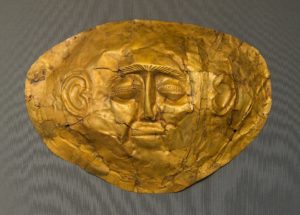 Mycenaean Greece is one of the most romanticized civilizations in history. The inspiration behind the tales of Agamemnon, Achilles, and other heroes in Homer’s The Iliad, Mycenaean Greece was the first advanced civilization to be based in what is known today as Greece’s mainland. Like many other Ancient Greek civilizations, the Mycenaean Kingdoms were separate, with no one political organization ruling the entire country.

The Mycenaeans are known among historians for a number of their triumphs, including havingpowerful political figures, strong city walls, and the accumulation and centralization of great wealth. Here’s more information about them:

The Beginning of the Mycenaean Civilization

Mycenaean Greece has its origins in 1600 BC during the Middle Bronze Age. The civilization was influenced by the political structure of Minoan Greek civilization, based on the island of Crete. When the Minoans were devastated by the eruption of Thera, a volcanic island in the middle of the Aegean Sea, the Mycenaeans were able to spread their influence over mainland Greece.

This period became known as the Koine Era, with Mycenaean culture becoming the uniform culture of Greece. The Mycenaeans were able to accomplish much of this through trade routes. The civilization took advantage of trading opportunities brought on by the Minoan collapse to establish trading centers in Asia Minor in the east and Italy and Spain in the west.

Mycenaean interest in Asia Minor naturally brought about conflict with the Hittite Empire, the dominant power in the east during the age. The major Mycenean political unit in Asia Minor during the Middle Bronze Age was known as Ahhiyawa Kingdom. This kingdom ruled over numerous islands in the Aegeanas well as large swaths of territory on the mainland of the continent.

The rulers of Ahhiyawa were known to encourage unrest among various Hittite vassal states, earning the everlasting ire of the Hittite elites. Historians believe that one such instance of unrest in the region Wilusa was the basis of the Trojan War in Greek mythology. Mycenaean Greece began to collapse in 1250 BC. While historians debate what precipitated this collapse, most place blame on internal dissent and invasions by barbarians from the Mediterranean that are now known as the Sea Peoples.

Mycenaean states have the unique hallmark of being ruled and organized with the palace at the center of political power. The palace micromanaged nearly every aspect of the territory under its rule. Typically built on a hill, palatial states were protected by strong walls around their capital cities. The city would be home for the king and the elite classes while lower class citizens and slaves typically lived in the countryside.

State rulers were known as wanax, and they ruled over all functions in the palace as well as the military and religious aspects of the state. Wanax also played an important part of the economic functions of Mycenaean Greece. Recorded in Linear B, palace officials were responsible for the distribution of goods, rations, and labor in the kingdom.

Mycenaean Greek civilization brought political power to the Greek mainland for the first time in Bronze Age history. In addition to influencing key aspects of Greek culture, Mycenaean Greece saw the rise of powerful kingdoms led by rulers who made Greece a force to be reckoned with on the world stage.