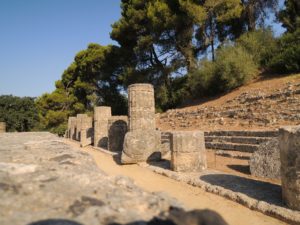 While visiting Greece, you should consider visiting the ancient site ofOlympia, which is located on the Peloponnese. Situatednear the Alpheios River, Kladeos River, and Mount Kronios, the archaeological site at Olympia is in a pristine location. Listed as a World Heritage site, it is rich in history because this is where the Ancient Olympic Games were held. Here’s more information:

What to See at Ancient Olympia

Olympia is a large archeological site that contains the ruins of about 70 different ancient structures. Thoughhistory has consumed the famed gold-and-ivory statue of Zeus that once dominated the sanctuary, other treasures have survived.  The surviving structures include bronze sculptures, metopes, and the famous Hermes complex designed by Praxiteles.

Zeus’s temple is one of the site’s highlights. Archeologists estimate that builders started work on the structure around 470 BC and finished in 457 BC. It’s a stunning example of the Doric architectural style popular throughout southern Italy and Sicily during the fifth century BC.

Another one of Olympia’s notable feature is the Atlas, a large, quadrangular sanctuary enclosed by three walls and a mountain. The Atlas itself houses temples honoring Zeus and Hera, plus altars and other religious objects.

In addition to the theological ruins, the archeological site at Olympia has plenty of other sites, such as:

For the first time in 776 BC, athletes from around the Mediterranean called a three-month truce and gathered in Olympia to celebrate humanistic principles and honor the gods. Participants engaged in peaceful competitions of endurance and strength between equal men. The quadrennial ritual became known as the Olympics, and it lasted until 393 AD.

Today, at the Olympia archeological site, visitors can stand in the palaestra where competing athletes would prepare, both mentally and physically, before events.

Olympia, the neighboring town, has plenty of museums filled with iconic works salvaged from the site. For example, the Archaeological Museum of Olympia keeps watch over the Nike of Paionios, an historical gem built in 420 BC. This is just one example of the types of artifacts you can see at the museum.

In its prime, Olympia was a bustling metropolis with religious, political and social significance. Today, as we learn more about conservancy, caretakers of the important site have taken steps to preserve its integrity while making sure it is accessible to everyone. While in Olympia you won’t want to miss the chance to visit this museum!

Most people who visit Greece come to the country for various of reasons. Sure, the food here is delicious and the beaches are amongst the best in the world. However, the country also has a rich history. Places like Olympia draw in visitors from all over the world who desire to learn a little bit more about Ancient Greece.