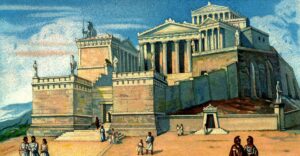 Homer is one of the most recognizable writers that has come out of Ancient Greece. We are all familiar with many of his stories, and he is said to have penned some of the most influential works in human history. Despite that, not much is known about his life. Read on to find some information about what we do know about him.

Get to Know Homer’s Works

Homer is most well known as the mind behind the epic poems: The Iliad and the Odyssey. It was thought that Homer was responsible for these works due to a poem called Homer that was crafted in Ancient Greece around 500 to 480 B.C. This led historians to believe that Homer was the widely accepted author of the Iliad and the odyssey.

In addition to his two greatest poems, Homer is also thought to have created dozens more. Read further to discover why his two major works were about and why they were so famous.

Homer’s works portrayed Greeks as noble, brave, competent, scholarly, and more. They were widely read at the time and were lauded as part of the pride of ancient Greece. Scholars attribute part of the spread of Christianity and Humane education, or the teaching of human rights to Homer’s two major works.

What We Know About Homer’s Personal Life

Homer was thought to have been born in Ionia, now known as Izmir in Turkey. Historians think he may have been born anywhere from the 12th to the 8th Century B.C. Experts theorize that Homer was blind due to his depiction of a semi-autobiographical character named Demokodos in The Odyssey.

It is speculated that Homer may have been a minstrel or a bard and would have therefore recited his poems to eager listeners with the accompaniment of a musical instrument. It is unclear exactly how long Homer lived, but he is thought to have died on the Island of Los.

Why Don’t We Know Much About Homer?

Historians don’t have many facts about Homer in part because he existed before the invention of a chronological calendar. The only way modern historians know of him is due to how he was talked about in politics, written works, and by prominent figureheads in ancient Greece. It’s even debated whether or not Homer was one person. Due to the stylistic and grammatical differences between The Iliad and the Odyssey, it’s been theorized that perhaps the person who is known as Homer was actually a collection of many authors.

Despite the mystery that shrouds Homer, it is undeniable that he left an enormous impact on the world. By continuing to explore his works we can learn more about the ancient Greeks and may even feel connected to them through time. Regardless, it is clear that Homer’s legacy has endured through the ages, and likely always will.