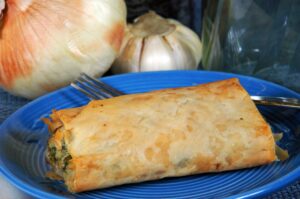 Greece is a country with a rich history in general, but did you know that there were many culinary influences to Greek cuisine over time as well? Starting in Ancient Greece, when trade exposed the Ancient Greeks to other cultures, there wasan exchanging of ideas when it came to the food. People that came to Greece brought food from their culture to the country and shared it with locals, who adapted it, and the Greeks did the same, sharing their own culinary traditions with outside cultures throughout the years, something that’s been going on for centuries.

You’ll see it yourself when you visit Greece!  You may be familiar with traditional Greek foods, but there’s a chance that some of the unique and interesting foods that are a part of Greece’s diverse cuisine will all be new to you.  Take a look at some of the most common culinary offerings to see what you should try first!

Saganaki is a dish that originates from the Greek island of Crete. It is made with fried cheese and is often served as an appetizer. Saganaki can be made with different types of cheese, but the most common type is graviera or kefalograviera cheese. In restaurants, servers often present saganaki to the table on fire and douse the flames with the lemon juice that helps give the cheese its flavor.  If you’re looking for a delicious and hearty appetizer, look no further than saganaki. This dish will tantalize your taste buds.

It is also worth noting that saganaki is one of the most popular Greek dishes. If you want to try something truly authentic, order this dish when you’re in Greece.

Souvlaki is a type of Greek kebab. It is made with grilled meat, typically lamb or chicken, and usually served with pita bread. Souvlaki is popular street food in Greece and can often be found at outdoor markets or cafes. Souvlaki is the perfect choice if you’re looking for a quick and tasty meal.

There are many different ways to enjoy souvlaki. The most popular way is to add tzatziki sauce, which is made with yogurt, cucumber, garlic, and dill. This combination of flavors makes for a delicious and refreshing meal.

Moussaka is a traditional Greek casserole with eggplant, ground meat, and a creamy sauce. It is then baked in the oven until it is golden brown. Moussaka is a hearty dish that is perfect for wintertime. If you’re looking for a filling and satisfying meal, moussaka should be on your list.

Moussaka is a Greek dish that gets its name from the word “moussos,” which means soft. There are many varieties of moussaka, each with its ingredients and cooking instructions. Moussaka will appeal to everyone because it is delicious and easy to make.

A gyro is a Greek sandwich made with grilled meat, typically lamb or chicken, and served on a loaf of pita bread. Gyros are popular street food in Greece and can often be found at outdoor markets or cafes. They are the perfect choice if you’re looking for a quick and tasty meal.

Gyros can be eaten in a variety of ways, but there is a typical way to make it that is considered traditional. In recent years, however, there have been variations. The most popular way to eat gyros is with tzatziki sauce, which is made with yogurt, cucumber, garlic, and dill. This combination of tastes makes for an amazing and refreshing dinner.

Spanakopita is a traditional Greek pastry with spinach, feta cheese, and phyllo dough. It is then baked in the oven until it is golden brown. Spanakopita is a light and flaky pastry that makes for a delicious snack or appetizer. If you’re looking for something to nibble on, spanakopita should be on your list.

You may enjoy spanakopita in a variety of ways. While it is more than flavorful enough to be enjoyed on its own, some choose to garnish it with the ever-popular tzatziki.  It is thought that the combination of flavors in both the spanakopita and the tzatziki is both complimentary and refreshing.

Yemista is a traditional Greek dish made by stuffing tomatoes and peppers with rice and other foods. It is then baked in the oven until the vegetables are tender. Yemista makes for a delicious and healthy meal. This dish can be enjoyed in a variety of ways. The most popular method is to combine feta cheese and olives. This version is known as “yemista plaki” and is frequently chosen by visitors of Greece, and locals, as well.

These traditional dishes are fairly unique to Greek cuisine, although there may be similar dishes in other cultures. Regardless of what the origin is, these foods are all traditional choices while in Greece. You should definitely try each of these!