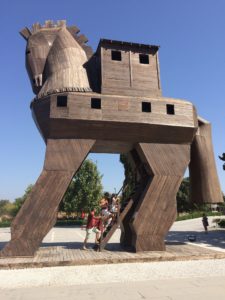 The Trojan War is one of the most recognizable conflicts in Greek mythology. The two works by Homer, the Iliad and the Odyssey, which take place after the Trojan war, have delighted people for thousands of years. Through these stories of war, romance, and deception, we learn about the gods and goddesses, popular heroes like Jason and Odysseus, and a multitude of creatures. There have even been archaeological findings that suggest that the Trojan War may have actually happened. Here’s more information about this war and the place it has in Greek mythology:

Origins of The Trojan War

In essence, the foundation of most of the major gods of Greek Mythology come from an extensive lineage of subsequent patricides. When Zeus became king of the gods, it was because he had killed the Titan Cronus, his father and the former king of the gods. Paranoid after learning of a prophecy that indicated that he would lose his throne to one of his children, Cronus swallowed most of his children whole.

One of the first things Zeus desired after becoming King was to depopulate the earth. As the story goes, Zeus used the Trojan War to do just that.

Details of the Trojan War

The war began over a golden apple. Hera, Athena, and Aphrodite were given a golden apple. Their task was to find a woman who was supposed to be the most beautiful goddess of them all. The goddesses began arguing about who would receive the apple and be deemed the fairest. They made Paris, a prince of Troy, the judge. He determined that Aphrodite was the most beautiful.

Since Paris had blessed Aphrodite with such a gracious gift, it was only right that Aphrodite reciprocate the kind gesture. In return, Paris requested that Helen, the wife of the King of Sparta, would fall in love with him. He was granted this wish, but this is the very thing that started the war. The King of Sparta, Menelaus, was upset that Paris took his wife back to Troy and he brought his army with him.

For the next decade, Helen’s former brother-in-law led expedition after expedition of troops while attacking the city. It took multiple sieges, but city did eventually fall to what is called the Trojan Horse. The Spartans built a wooden horse large enough to hide their troops inside. They said it was a gift, and the Trojans let the horse inside its walls. When everyone was asleep, the Spartans exited the horse in order to fight. This marked the end of the war.

The war took several years, and it took some of the heroes even longer to return home. Homer described what Odysseus went through to return to his family in the Odyssey.