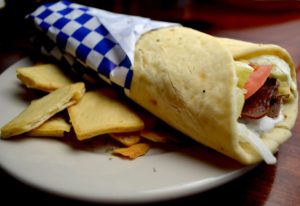 Greece is known for its amazing landscape, gorgeous beaches, thriving nightlife, and rich historical past. Besides that, it is also a country known for its delicious food! Tourists often have difficulty figuring out what they should eat while they are traveling to this country. Here are some foods that you should try during your trip to Greece:

Even if you’ve had a gyro before, you have probably never had one that tastes as good as they do in Greece. This sandwich type dish is made with Gyro meat that’s roasted and sliced. It’s then placed inside of a piece of homemade pita bread. Other items are added to it including tzatziki sauce, lettuce, tomatoes, onions, and in many places around the country, French fries! A gyro makes for the perfect quick dish for people on the go.

Salads are more of a meal than a side in Greece. Horiatiki, the “village” salad, is a celebration of all the fresh produce Greece has to offer. For that reason, it doesn’t contain lettuce, which doesn’t grow abundantly in the Greek climate. This type of salad typically consists of cucumbers, olives, tomatoes, onions and peppers. It also contains feta cheese, olive oil and a variety of spices. If you want a truly authentic experience, eat it as the Greeks do. Don’t top it with any type of dressing. It doesn’t need it since the ingredients are so fresh.

This dish may vary based on what region of Greece you eat it in. Dolmades are basically grape leaves that have been stuffed with a mixture of different items. This mixture tends to consists of ingredients like rice, peppers, tomatoes and sometime minced meat like lamb. For those that are looking for a version with a lot of flavor, go for one that has been stuffed with a variety of herbs like dill, oregano and thyme.

Those that love all things cheese will rejoice when trying this dish. Saganaki is an appetizer that is made out of only flour and cheese. The cheese used can vary greatly. Popular choices are kefalotyri and vlahotiri cheeses.

This dish is made by dipping the cheese into a container of cold water, and then placing it in a bowl of flour. The excess flour is removed by shaking it. The flour coated cheese is placed in a skillet and heated for a few minutes, flipped and cooked for a few more minutes.

You’ll know it’s been thoroughly cooked once it forms a golden crust. In some restaurants, the cooked cheese is doused in brandy and set on fire just before it is served, earning it a reputation as a “flaming cheese.” The flame is doused by squeezing lemon over the cheese and served immediately after.

These aren’t just your ordinary meatballs. Keftedes are made out of meat like lamb, pork and ground beef. Before they are fried, they are lightly coated with flour. This gives them a slight crust on the outside. Then can be eaten plain, but they are sometimes served with pita bread or rice.

As you can see, there are plenty of delicious foods to sample while in Greece. All of the dishes mentioned above will tantalize your taste-buds during your time in this magnificent country. Greece is best explored after having a hearty meal that features some of the country’s most well-known culinary delights.