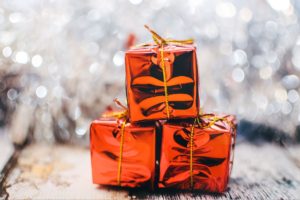 Caroling (kalanda) has roots in ancient Greece. Children would carry small boats (Christmas boats or “karavaki” meaning little ship) and sing songs honoring Dionysius. In Ancient Greece the children would praise the head of the household. At this time in history they would also gift the head of the household with an olive branch, which signified prosperity. Greek Christmas carols date back to the Byzantine times.

After singing for the household, the children would often be invited inside for a refreshment. It is thought that the significance of the boats has to do with Saint Nicholas (Agios Nikolaos) who is the Patron Saint of Sailors in Greece and is celebrated on December 6. Additionally, when seamen returned home during Christmastime, their wives would welcome them home with small wooden boats that they had decorated for the occasion. Boats have great significance in Greece, which is not surprising considering its location and history.

Many of the elements of this Greek Christmas Eve tradition still exist today. Carols are sung on Christmas Eve, New Year’s Eve, and Epiphany Eve, which is on January 5. Children go door to door asking for permission to enter the home to sing the songs. When the homeowner lets them come inside, they begin singing. They sing traditional carols, such as the Greek translation of Silent Night and also the popular Greek carol, Κάλαντα Χριστουγέννων, or The Kalanda Song. This the most traditional, and ifthe singersonly have time to sing one song, this tends to be it.

It is not uncommon that the children will add some lines that wish the head of the household prosperity for the year ahead and a long life. They often bring along triangles to bang as they sing. The playing of the triangle is not necessarily in tune with the carols they sing, but is rather part of the tradition. Other instruments, such as harmonicas or drums, may also be used. Sometimes children will still carry the small decorated boats. When they are done singing, the homeowners will give them edible treats, such as cookies or sweet rolls, or small amountsof money.

The Greek tradition of kalanda, or singing Christmas carols, on Christmas Eve is one with a long and interesting history. This is a tradition that is still in place today and is a big part of the way Greek celebrate Christmas.