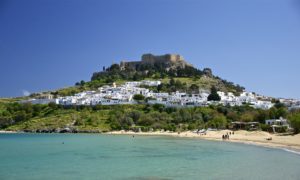 Palace of the Grandmaster

The Palace of the Grandmaster is located in the Old Town of Rhodes. The palace was constructed in the 14thcentury by the Knights of Saint John and built on the Temple of the Sun God (Helios). It consisted of 158 rooms, but today only 24 rooms are open to the public. The rooms contain furniture from the 16thand 17thcenturies.

Thepalace boasts multi-colored marble, Oriental vases, and manysculptures. Sadly, much of the original palace was destroyed when explosives went off in 1856. The palace was restored in the beginning of the 20thcentury by the Italians. There are a couple ofdifferent tours you can take of the palace that include a Segway tour and a private walkingtour.Visitors may also explore the palace on their own.

The Acropolis of Lindos is located 45 km south of Rhodes Town. The ancient town of Lindos was founded in the 10thcentury by the Dorians. Thanks to its location between Greece and the Middle East, it became a major trading center. When the city of Rhodes was founded, the use of Lindos declined.

There is much to see at the Acropolis of Lindos. There is a 4thcentury Doric temple that was dedicated to the Athena Lindia, an ancient warship that sits at the foot of the staircase, a Roman temple dedicated to Emperor Diocletian, and the Hellenistic wall that surrounds the acropolis.

In the Old Town of Rhodes, you will find the Archaeological Museum. The museum is located in the Palace of the Grandmaster in the Hospital of the Knights. In the museum you will get to see items found during excavations from around the island. There are statues and a number of epitaph plaques from various periods. There is also a collection of pots and earthenware urns.

Butterfly Valley is a beautiful attraction to take in when visiting Rhodes island. It is located on the western side of the island about five kilometers south east of Theologos. Butterfly Valley is a natural reserve and has become a popular tourist attraction. Butterflies come to this valley to reproduce because of its ideal climate.

It’s important, for this reason, to not disturb the butterflies by being loud in any way. Think of the area as a quiet sanctuary to relax and enjoy the beauty. When visiting Butterfly Valley, you can also take an uphill path to the Monastery of Panagia Kalopetra. There are also places nearby to eat with spectacular views of the waterfalls.

The Aquarium of Rhodes

The aquarium consists of 15 small tanks and 13 large tanks. The aim of the aquarium is to preserve and share the species of the Mediterranean Sea. You will see creatures including: dolphins, sharks, sea turtles, lobsters, bivalves and many types of fish. The aquarium is designed to look like an underwater cave.

When visiting the island of Rhodes, you should check out a few of these attractions. Whether you’re into nature or history, there is something here for you.