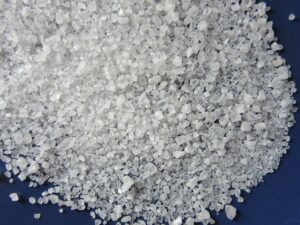 Sea salt is something that should be an important staple in nearly every kitchen. It has been this way since ancient times, when salt was used as a main source of currency and was an important item to trade. Ancient Greece was no exception to this rule, where salt was in abundance because of its prime location by the sea. Today, salt is still being produced here and is still an essential part of the cuisine. Here’s more information:

There’s no doubt that salt is important to civilization for various reasons. For example, the human body is mostly saltwater. We need salt for dozens of body processes, such as nerve conduction. It is one chemical that is not easily obtainable through our diet. For thousands of years of human history, salt has been a precious commodity. In fact, the word salt comes from the Roman word “salary”, because at the time soldiers were paid in salt.

Salt wasn’t just important to Rome, but to people throughout the world, including the Ancient Greeks. There was a saying in Ancient Greece that basically said, “no one should trust a man without first eating a peck of salt with him.” Since salt was so valuable, the common idea is that if you trusted him enough, you wouldn’t hesitate to share it with him. In all corners of the world, salt was essential to improve the flavor of food and also to help preserve it.

How Greek Sea Salt is Produced

The method of preparing sea salt today isn’t that far removed from how it was done in Ancient Greece. Greek sea salt is produced by the evaporation of seawater from a brine. The Greek coast has many bays and inlets. On flat tidal plains, Greek salt farmers create shallow pools of seawater that are bordered by small levees of soil. Plentiful sunshine and wind evaporate the water, leaving behind the salt. Depending upon the size of the pool and the weather, it can take up to a year for the salt to become fully dry.

The only thing that has changed over the years is the scale of operations and the use of modern machinery. Gone are the days of backbreaking salt shoveling by hand. Now powered machinery harvests the dried salt. Just a few people can process as much salt as hundreds of men in the past. Modernization has given the Greek people a way to once again share their high-quality salt with the world.

Although there haven’t been large scientific studies comparing salt mined underground compared to sea salt, it does have some beneficial chemicals. As the seawater evaporates, the water is removed, but the minerals that were dissolved in the ocean are retained within the salt. It contains magnesium, calcium, potassium, iodide and other beneficial trace elements.

Salt is mined from the ground and produced near seashores all over the world. You may wonder why Greek Sea Salt is so beloved by chefs and home cooks. What makes Greek Sea Salt unique is its color, shape, texture, and taste. It is known for being exceptionally white and of high purity. The dried salt breaks apart into many thin and flat crystals rather than the granular shape of most common table salt.

Greek sea salt is an important part of the cuisine. It also has special characteristics because it dissolves and disperses into the food in a special way. Greek cuisine wouldn’t be the same without it!