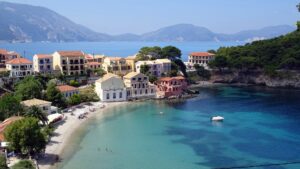 Kefalonia is an island to the west of mainland Greece. It’s famous for its sandy coves, mesmerizing water, and dramatic landscape. While Kefalonia is a popular tourist destination because of its beauty, this Ionian Sea island has a rich culture making it an excellent way to pass the time while visiting Greece.

Its quaint villages, exotic animals, Rabola wine, and gorgeous beaches blend to create a paradise. With so many things to do on the island, planning a trip to Kefalonia can feel a little overwhelming, but there are a couple of attractions that no one should pass up while visiting the exotic island. Here’s a look at what you can do while here:

Fiscardo Village is a beautiful village that started as a humble fishing village. Its port features excellent seafood restaurants, fun bars, and adorable cafes. Fiscardo Village is one of the few areas of the island that was left untouched by an earthquake that devastated parts of the island in 1953. As a result, the town features traditional colors that are a cornerstone of the Venetian style of architecture. Fiscardo is also a perfect place for tourists who are looking for a vibrant nightlife. After the sun sets, the beautiful coast lights up, and this popular village comes alive.

The Ionian Islands are known as being home to some of the most spectacular beaches in Greece, but Myrtos Beach is consistently listed in many publications’ “Top Beaches in the World” articles. This marvelous beach is on the north-west of Kefalonia Island, and it sits perfectly in between two beautiful mountains. This white pebbled beach is framed by cliffs and accessed by a winding road that immediately showcases the beauty of the island’s coast. It is a perfect spot for a romantic getaway, and the beach features an unforgettable sunset.

The Archaeological Museum of Argostoli was rebuilt after the earthquake in 1953 and finished in 1960. The museum features three exhibits that span from the paleolithic period to the post-Roman period. The first exhibit features findings by Skala, Sami, and Fiskardo. The items on display include pottery, tools, and ceramics from the Paleolithic period and the Neolithic period. The second room holds findings from the prosperous Mycenaean period discovered in burial sites throughout the island. The last room in the museum features artifacts from a time-period where Kefalonia consisted of four city-states. The third exhibit features marble sculptures, burial columns, and even a floor taken from a sanctuary for Poseidon.

Melissani Cave is a popular tourist attraction and known in Greek Mythology as the Cave of the Nymphs. While the cave was first believed to be discovered in 1951, excavations in 1962 produced plates, lamps, and figurines resembling Pan as wells as nymphs. The cave itself has two chambers. The first chamber’s roof collapsed, creating a stunning view for private boats. The other cave chamber features beautiful algae and stalagmites. Melissani Cave is a perfect attraction to visit while the sun is shining, and the sunset provides a gorgeous color transition of the water inside the cave.

Katovrathres is home to an extremely rare geological phenomenon that sits just outside of Argostoli Village. In this peculiar place, seawater falls into a sinkhole that flows through the island. A study in 1963 revealed that the sinkhole takes water from the sea and funnels it through an underground system until it reached Melissani Lake, which is 15 kilometers away. The water then continues to flow through Karavomylos Village, where it shows up inside a freshwater lake that empties into Sami Bay.

Kefalonia Island is a wonderful place to visit for anyone looking to escape a busy lifestyle and relax on a beautiful coastline. The quaint villages are fun and vibrant, and the beaches are the perfect place to cherish some of the most beautiful views in all of Greece.