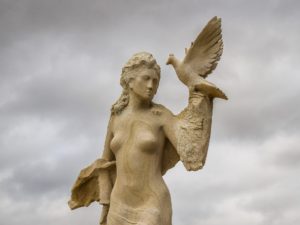 In the past, the Greeks believed that the gods were in charge of many aspects of their lives. These gods and goddesses were given superhuman abilities and were also blessed with immortality. There were many gods and goddesses, and each represented something the Greeks felt was important.

Aphrodite was one of these goddesses and she was largely known as being the goddess of love. She represented all things dealing with love, romance, and passion. Here is more information about her:

The Greeks built many temples in honor of Aphrodite, which showed how highly she was valued. Her name became a symbol of beauty and love. It is synonymous with eroticism. According to legend, Aphrodite’s father, Uranus, was an evil man who was mean to his wife and children. Aphrodite’s creation occurred when Uranus’s wife and their son, Cronus, decided to expel him from heaven.

In the attempt, Uranus castrated Cronus and threw his male organ into the sea, along with much of his blood. The blood foamed and transformed into a gorgeous woman. Her beauty enamored the sea nymphs. They dressed her in magnificent garments made of flowers and gold.

Her name, Aphrodite, is from the Greek word ‘Aphro,’ which, means foam. It is said that she was borne out of the foam of the ocean, just off the island of Milos. She was portrayed as gentle and loving, but she could also be fierce and had many lovers.

Aphrodite had many lovers and married two of them. Her first husband was Hephaestus, the god of fire, who was thought to be unattractive. His mother, Hera, turned him into a cripple. Out of resentment for being crippled, he tricked his mother and imprisoned her in a golden throne. Zeus promised Aphrodite’s hand in marriage to the one who was able to free Hera from her prison.

Since Hephaestus trapped her, he was also able to free her. Aphrodite became the wife of Hephaestus. She was not a faithful wife. Her most passionate affair was with Ares, the god of war. The idea of war and love fascinates many because while they outwardly appear to be opposites, they share similarities in their origins and the passion that leads to their manifestation. Some myths tell us she was able to marry Ares after divorcing her first husband. He was her one true love, even though she had multiple affairs.

Aphrodite and the Trojan War

Aphrodite goes down in infamy for starting the Trojan War. All the gods but a sea nymph, Eris, received an invitation to the wedding of Thetis and King Peleus. Eris planned to cause chaos at the wedding. She sent a golden apple to the wedding with a label saying ‘to the fairest.’

Aphrodite, Hera, and Athena all felt the apple was for them. Zeus wisely refused to choose the fairest. He assigned Paris, the most handsome man, and a noble Trojan to make the decision. Each of the women bribed him with promises. Only Aphrodite was able to deliver her promise of the hand of Helen of Troy, the most beautiful maiden. The problem was Helen was the wife of the Greek King Menelaus. When he took Helen as his wife, the Trojan War began.

Aphrodite was one of the most intriguing goddesses of Greek mythology. As the goddess of love, she was important to the Greeks of the time and there were many temples built in her honor.