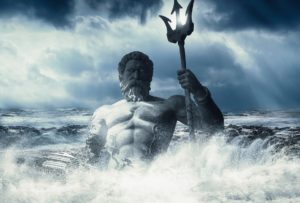 Poseidon is the Greek god of the sea, known to be as turbulent and impulsive as the waters themselves. He is commonly portrayed in art with his three-pronged trident. One moment he can be kind; the next, he can be angry and vengeful.

He plays a large part in ancient mythology and, according to ancient Greeks, also played a part in how the world came to exist the way it does today. The Roman equivalent of Poseidon is “Neptune”. Here is some more information about the god.

Get to Know Poseidon’s Family

Poseidon was conceived by Rhea and Cronus and was brother to Zeus, and Hades. Not the most nurturing father, Cronus actually swallowed Poseidon and Hades along with their sisters Demeter and Hera. Zeus was the only one Rhea was able to protect.

He married Amphitrite and conceived Triton. He also conceived the mythical Pegasus with famous man-eater Medusa outside of his marriage. He was also father to Orion, Polyphemus, Pelias, and Arion.

Poseidon owned a palace on the ocean floor but could often be found on Mount Olympus with the other gods. When he did travel from place to place, he generally used a chariot pulled by horses who were rumored to be able to breathe underwater.

After being eaten by his father, Poseidon was saved. Unfortunately, there was immediate struggle when he was forced to team up with his brothers and other gods to help defeat the giant Titans who had escaped captivity and started causing havoc. Thankfully, they did eventually succeed.

Poseidon took the side of the Greeks during the Trojan War. He was upset when Zeus forced him to step away from the conflict. After the Trojans won, Poseidon infamously held a grudge against Odysseus and made his travel home almost impossibly hard.

He also competed with Athena for the city of Athens. Unfortunately, he lost when she gifted them with an olive tree. Poseidon’s gift was to give the people of Athens’ spring water, but the people deemed Athena’s gift worthier so the city was named after.

As previously mentioned, Poseidon could have a bit of a temper. When angry, he would make travels on the sea extraordinarily difficult. He would also hit the ground with his trident when angry, giving him the nickname of “Earth-shaker”.

As god of the sea, sailors and other people who found themselves called to the ocean would often pray to Poseidon for protection on their travels. If someone found a new island or arrived to their destination safely, they would thank Poseidon.

Poseidon was considered to be one of the main gods of Greek mythology. He is included in many of the most popular stories, including the creation of the world as we know it and the Trojan War. He and his famous brothers are the basis of Greek mythology and a great place to start if you want to learn more.