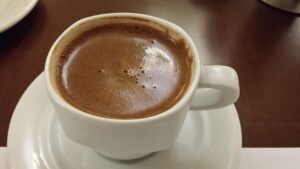 Coffee is an important part of Greek culture and people all over the country enjoy it on a regular basis. There are several different types of coffee drinks that you can enjoy, such as the traditional hot coffee and the colder Greek frappe. Whether you are visiting Greece or want to enjoy Greek coffee outside of the country, here are some of the Greek coffees that you will want to try.

Traditional Greek coffee was inspired by Arabic and Turkish coffees that are found elsewhere in the world. In fact, its use in Greece could trace to Ottoman Occupation, and the coffee is still prepared the same way today as it was back then.
The coffee is made from beans that are roasted at a specific temperature and then ground into a fine powder. This coffee is not brewed, but boiled in a narrow pot called a briki. The boiling method gives the coffee a creamy flavor. It is served in a small cup where the grounds settle at the bottom of the cup while it is sipped slowly.

Frappe is a popular iced coffee drink that is made from instant coffee, water, ice cubes, and sugar. It has a delicious foamy texture and it is the perfect, icy beverage for a hot day. This is one of the most beloved ways to make coffee in Greece!

The Greek frappe was invented by accident in 1957 by a representative of the Nestle company named Dimitris Vakondios. One day during his break, Vakondios couldn’t find hot water for his usual coffee, so he mixed his coffee with cold water in a shaker. The shaker was intended to be used by children so they would be able to make their own hot chocolate drinks. The result of Vakondios’ attempt to make coffee became the frappe, which in 1979 became the national coffee of modern Greece.

The frappe can be enjoyed at three different levels of sweetness, depending on your sweet tooth. The plain frappe is known as sketos, has no added sugar; the metrios, has two teaspoons of sugar; and the glykos is the sweetest with four teaspoons of sugar. If you make your own frappe, you can use a cocktail shaker to mix the drink using two teaspoons of instant coffee, water, and your chosen amount of sugar.

Once you pour this mixture into a glass, you will add water and ice cubes. You can also add milk or evaporated milk if you want. When visiting Greece, you will want to enjoy a traditional Greek frappe. It’s the ideal drink to enjoy outdoors on a hot summer day.

The Greek coffee known as freddo comes in two different versions: espresso and cappuccino. Freddo espresso is made with one shot of espresso that is put into a hot metal canister. It is blended with ice cubes and sugar that is added throughout the mixing process. The warmth of the canister and the chill of the ice cubes is what creates the foam that the freddo espresso is known for.

If you are a coffee lover and want a taste of Greece, you will want to try these Greek coffees whenever you get the chance!