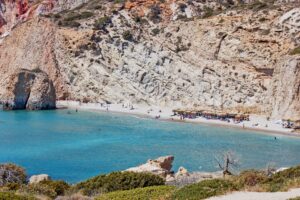 The Greek island of Milos is on the smaller side, but there is no shortage of things to do here.   Similar to the island of Santorini, Milos is an island that is partially defined by its volcanic activity.  Many of the beaches found throughout the island have been formed thanks to this, and some of them are considered to be some of the most beautiful in Greece.  Here’s a look at some of the best beaches to visit while here:

Sarakiniko Beach isn’t large, but it is one of the most beautiful on the island. Nestled between whitewashed outcrops formed by volcanic rock, sandstone, pumice stone, and ash, sunbathers set up on the surrounding sands and overhanging ledges. The iconic spot is northeast of Milos along the coastal road east of Adamas. One of the most photographed landscapes in the Aegean Sea, the beach at Sarakiniko is amongst its most popular.

You can only get to Kleftiko by water taxi, but the beach is worth the effort! The turquoise waters sparkle like polished gems, and the rock formations wreathing the beach make the perfect backdrop for spectacular snapshots. When deciding on a transportation service, choose wisely. After all, you don’t want to get caught on a party boat if you’re craving a serene experience. This is also a great beach for snorkelers, as there is much to explore. Consider visiting the Kleftiko Caves, which can be viewed under the surface of the water.

Neighboring Tsigrado, Firiplaka is a one-of-a-kind beach experience along Milos’s southern coastline. The silver-sand coast is dotted with large colored rocks and gives way to shallow green-blue waters. The beach is long, which means that finding a cozy-but-private spot is possible during off times, but it does get crowded during the busy season. If you stay for the whole day, you might want to rent one of the umbrellas to protect you from the direct sun.

If you’re looking for a picturesque secluded beach in Milos, make a beeline for Plathiena Beach. A hidden gem at the end of a narrow road, Plathiena is on the island’s north side. However, if you plan to go, pack supplies. It’s not close to anything, so hopping across the street for a snack or beverage isn’t an option. However, in the high season, a canteen opens on the beach for a few hours each day. Plathiena Beach is accessible by both car and boat.

Imagine an idyllic, isolated beach. Do visions of crystalline waters, majestic rock formations, and ivory sands fill your head? If so, you now have a mental image of Tsigrado Beach in Milos, Greece. If you’re thinking of going to Tsigrado, be aware that walking down to the cove is a bit treacherous. As such, anyone with mobility challenges may want to choose someplace a bit more accessible. There’s a reason it’s known as the most secluded beach on the island, because getting here can be difficult. However, it’s well worth the effort.

Milos is filled with great beaches, but these are some of the best. You can’t g

o wrong with any of them and they all offer a great way to spend the day.

Best Beaches on the Volcanic Island of Milos