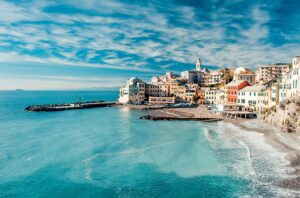 Santorini is one of those places in Greece that should be at the top of your “to visit” list. It is a place that is filled with wonder, especially since the very appearance of the island is a sight to behold. Thousands of years ago, a massive volcanic eruption felled the middle of the island into the sea, giving the island its unique appearance. Some even speculate that this “lost” part of the island is the fabled Kingdom of Atlantis. As a result, the very island has a mythical quality.

There are plenty of places to visit while here, but none are as engaging as Ancient Thera. The archaeological findings stand out because it is a remnant of the ancient life that used to exist here. You should visit the site while on the island. Here’s more information:

The Cyclades are the group of islands that fan out below Greece, populating the azure Aegean Sea with little oases of brown and green. Santorini is nestled on the south end of this island group but is one of the most beautiful and desirable to visit. The steep hillsides of the Greek island are populated with small white dwellings that pop bright sapphire roofs. The unique beaches with their colorful shores show evidence of the island’s volcanic past. There’s plenty to do here!

When you’re not enjoying the town squares and playing on the numerous beaches, take a trip up to the top of Messavuono mountain to experience the site of Ancient Thera, named for its mythical ruler. The ruins are still intact, and as you explore the Agora, courtyards, temples, and theater, you will be transported back thousands of years to the height of the Greek empire. It has the best view on the island, and if you can make it up there for sunrise or sunset, you will not be disappointed.

Due to its important geopolitical location in ancient times, you can see evidence of other cultures that occupied the site. In addition to Grecian architecture and buildings, you can also see Byzantine walls running past Roman baths that were built next to the ruins of Hellenic shops. The amount of history and culture that is crammed on the summit of a small island in the Aegean Sea is astounding. Being out of the normal path of tourist activity makes it a dream for history lovers who want to immerse themselves in the past. And if you don’t like crowds but still want to enjoy a piece of history, Ancient Thera is the perfect place for you.

How to Get to Thera

With ferries running frequently between Athens, Mykonos, and Crete, it is not difficult to get to Santorini. Once there, you can rent a car for the day to get to the top with ease. If you’re more adventurous, there are buses that can drop you off far enough away to allow for a nice hike to the top. There are local guided tours as well, if you’re curious about the rich history of the site.

Next time you’re thinking about making a trip to the ancient world to learn about history, think about Ancient Thera. It’s the perfect place to unwind on the pristine beaches of Santorini, and explore the rich history of the underrated site of Ancient Thera.