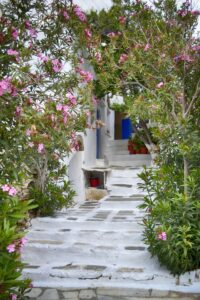 Tinos is located on the northern region and has been one of the most enchanting travel destinations in Greece, thanks to its idyllic climate and enchanting setting. Some of the features that make it stand out among others include its sandy beaches, traditional village, and breath-taking scenery. Once you arrive, you will certainly want to make the most of your stay by seeing all the sites. Here are some of the places you won’t want to miss while here:

Other than serving as the saint protector of Greece, the Church of Panagia Megalochari is the patron saint of the island. The facility is the most popular pilgrimage in the country. It is located on a hill above Tinos’s capital.

Many worshippers cover the distance between the Church of Panagia Megalochari and the port on their knees. Since the path is rough, a long red carpet has been laid between the two points. There is debate as to why people do this, but some believe that it is a sign of respect. You don’t have to do this in order to visit the church, though!

Tinos is famous for the high number of uniquely designed dovecotes that have been built over the years. A dovecote is a small structure intended to house pigeons or doves. The structures are made of stone and have two levels. Utensils and other items are placed on the lower level

Some dovecotes were constructed in the 18th and 19th centuries. Most of them are found in the eastern and central parts of the island. Although there are many other structures in other parts of Greece, the ones in Tinos are much more than just wooden boxes set on poles.

Giannoulis Chalepas is one of the most famous personalities on the island because he was born and raised here. He was a renowned marble sculpture artist. The tradition on this island for marble is long, and Chalepas made a lot of contributions.

Chalepas’ ancestral house in Pyrgos village has been turned into a museum. Although it has narrow rooms, it hosts different types of furniture that he made, including beds, chairs, and tables. The items depict the traditional decoration techniques in Tinos.

One of the most famous sanctuaries in Poseidon was located on the island, and is walking distance from the beach of Kionia. Tinos stood out as the only island that had a temple for Poseidon, the god of the sea.

Archeologists have not been able to establish the exact date that the sanctuary was constructed. The temple made the island a major religious center, and most residents would come to the facility to cleanse themselves before heading to the sacred island of Delos.

The Museum of Tinian Artists is located next to the Church of Panagia Evangelistria and was founded in 1930. You can find works of the best artists in Tinos inside the museum. Most of the artists got scholarships from the Holy Foundation of Evangelistria. Their works are on display here and the collection of art is not only of the highest quality, but is also a point of pride for the people on the island.

Tinos is an island worth visiting to get away from it all. While here, you will want to visit at least some of these sites!