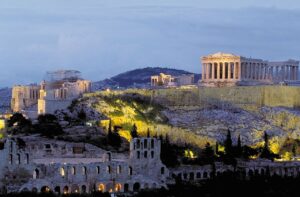 Greece is one of the most intriguing places in the world to visit. Since it is so rich in history and culture, it’s no surprise that Greece holds some of the world’s most beautiful and historical museums. From Athens to Thessaloniki to Crete, Greece can offer plentiful sights for fans of art, history and nature. Here are some of the museums you won’t want to miss while in Greece:

With over 4,000 historical artifacts on display, The Acropolis Museum of Athens is something that visitors of Greece absolutely must visit! The museum consists of excavated objects from the archaeological site in the Acropolis of Athens, separated by chronological order of the time period. There are additional archival collections from other excavated areas, including around Attica.

While here, you should also take a look at the intriguing use of glass both in the interior and exterior of the building, designed by American Bernard Tschumi and implemented by Greek Michael Photiades. Located in the beautiful district of Makrygianny, Athens, this museum is a must-see for art and history lovers alike.

Originally established in 1930, The Benaki Museum in Athens has always been a place to go to learn about the foreign influence on Greek culture as we know it. Since its renovation and reopening in 2000, the Benaki has become one of the only museums to bring visitors through all ages of Greek culture and history.

The Benaki museum focuses on displaying donated items in order to encourage the public to participate in its rich history. It focuses not just on the past, but on the way that Greece changes on a day to day basis. Parts of the Benaki Museum’s collections have traveled to the United States, Canada, and Australia over the years, helping to bring international attention to this small museum.

Often considered one of the greatest museums in the world, The National Archaeological Museum in Athens should be on everyone’s bucket list. The museum has a large range of collections, with the most notable including Eqyptian antiquities, sculptures of Greek Gods and Goddesses, and Stathatos and Vlastos-Serpieri’s vases and minor objects. The date range of the collection extends from prehistoric times to the 19th century. Besides the collections, the museum often holds archeological lectures in its grand lecture hall to any interested visitors.

Fans of military history should head to The War Museum of Thessaloniki in Central Macedonia, Greece. Since its opening in 2000, The War Museum’s encompasses air force and navy uniforms, army weapons, replicas of army ship vessels, significant maps, paintings, postcards and photographs that are all of importance to the history of Northern Greece. Visitors will also gain insight into the Balknan Wars, World War I, World War II and the Greco-Italian war, among many others. After a visit, fans can pick up important literary works on the historical happenings in the museum shop.

For those looking for something different than historical and archaeological artifacts, visitors will want to check out The Natural History Museum of Crete. The museum’s focus is on the natural environment, and includes impressive exhibits and activities for all ages. The museum is separated into five different zones: zoological, botanical, anthropological, paleontological-geological and mineralogical.

However, one of the most popular exhibits in the museum is the Seismic Table, an interactive earthquake simulator. In this exhibit, visitors will experience what it’s like going through an earthquake (safely, of course) and obtain useful knowledge on what they should do if the situation were to arise in reality.

Palace of the Grand Master in Rhodes

Gothic architecture can be hard to come by in Greece, but visitors can find it at The Palace of the Grand Master in Rhodes. Built in the 14th century by The Knights of Saint John, the castle originally consisted of 158 rooms. Today, 24 rooms are available to the public, but each room contains its own impressive collection. Included in these areas are 16th and 17th century furniture, sculptures, carpets, and Oriental vases. Other popular rooms include the Grand Reception Hall, the Music Room and the ballroom. Outside the palace is an expansive garden, which is full of Greek and Roman sculptures.

Greece has plenty to offer museum fans from all corners of the globe! From history to art to nature, there’s plenty to find in a country of such a compelling history and culture.