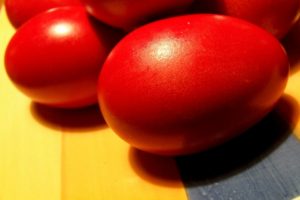 Red Easter eggs are something you are likely to find on the table during Greek Orthodox Easter celebrations. They are as traditional as the lamb and delicious bread you’ll enjoy. But have you ever wondered why the eggs are dyed red? There is special meaning being these dyed eggs. Here’s what you need to know about this popular tradition.

The holiday of Easter commemorates the resurrection of Jesus Christfrom the dead. The Easter egg itself is meant to be a reminder of the tomb Christ was in before His resurrection. Dyeing eggs red symbolizes Christ’s blood and the cracking of the egg, represents His resurrection. The dyeing of the Easter eggs is one of the oldest Easter traditions for Greek Orthodox Christians.

Greek Orthodox tradition says that the eggs are to be dyed on Holy Thursday in commemoration of the Last Supper, though they can be dyed any day leading up to Easter. Sometimes a priest will say a special prayer to bless the eggs. In addition to being on the table at Easter dinner, the red dyed eggs are sometimes placed inside the traditional Greek Easter break called tsoureki.

Tsougrima is a game played with the red dyed Easter eggs. The word Tsougrima means “clinking together.” To play this game, each player holds a red egg and taps it lightly against another player’s egg. When one egg’s end is cracked, the person with the unbroken egg uses the same end of their egg to try to crack the other end of their opponent’s egg. While cracking eggs, one person says “Christos Anesti” (Christ has risen) while the other person responds “Alithos Anesti” (indeed He has risen).

There a few thoughts on how the Greek Orthodox Christians adopted the tradition of dyeing eggs red. One is that early Christians stained eggs red in memory of the blood of Christ, who sacrificed himself for mankind. The Roman Catholic Church published a document in 1610, which gave instructions for blessing food at Easter. This included Easter eggs.

The tradition would continue in many countries like Greece. One legend says that Mary Magdalene went to Rome to preach the Gospel. She greeted Emperor Tiberius by handing him an egg and saying “Christ is risen.” The emperor told Mary Magdalene he was skeptical and the egg in her hand turned red.

Decorating eggs isn’t new, it’s actually an ancient practice, which could partially be where the Greeks got it from. Also, other cultures have adopted the tradition of painting eggs.

For example, Eggs were also a fertility symbol for the Pagans. The Germanic fertility goddess, Eostre, would carry a basket of eggs to promote fertility. Her followers would give her eggs as an offering. During the early stages of Christianity, the egg became an Easter symbol.

The tradition of dyeing Easter eggs red has a long and meaningful history during Greek Orthodox Easter.