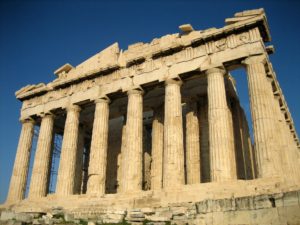 Those of us who enjoy a system of government referred to as democracy tend to take itfor granted. However, there was a time when it didn’t even exist! Thanks to the Ancient Greeks, specifically those from the city-state of Athens, the world is able to enjoy the benefits that come with democracy.

How, exactly, did the Ancient Athenians develop this form of government? Over the course of history, inthe area that eventually became the modern-day country of Greece, the people developed the first democracy. Here’s more information about how this came about:

Democracy Begins with a Revolution

Before the Athenians developed democracy, the system of government was vastly different. The society was set up so that a minority of elite, noble families ruled the people, and the people were conditioned to believe there wasn’t much they could do to change things. Important decisions pertaining to their lives were made without the people taking part. They looked at themselves as being turned into slaves by the rich elite and this eventually led to a revolution.

A man named Cleisthenes, who was raised into one of the ruling noble families in Athens, the Alcmaeonidae family, listened to what the people had to say and he realized they were right – they needed to rule the people. As he watched the fighting unfold, he realized that the people should be able to have a say in the government. Ultimately, he managed to convince the people with power to change the system that existed. This is how democracy began. Under his leadership, the system of government changed from one where the people were ruled by the families to one where the registered citizens of Athens made all the decisions. His rise, however, was turbulent. He was asked to leave Athens in exile at one point, but when he was asked to return, he implemented the new government.

Athens Was a Direct Democracy

The system that Cleisthenes developed and implemented is referred to as a direct democracy. This means that every decision that needs to be made would be made by the citizens. Sure, there were politicians in this system, but their main function was to give speeches when developing laws, strategies, and policies to try to convince the population to vote in their favor. They didn’t directly implement any laws unless the people were voting. It is important to note, however, that only a small part of the population could vote. Voting was restricted to males who owned property. This, however, encompassed more people than the old system did. At least someof the population could influence the decisions.

Structure of the New Democracy

Just like our modern systems of democracy, the new Athenian system had three branches of government. These are:

As you can see, the system that the Ancient Athenians developed formed the background of our modern forms of democracy. For more information, check out Episode 2 of The Greeks, which tracks the history of Greece from the Dark Ages to the formation of the first democracy.