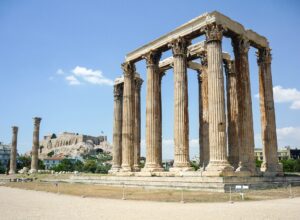 Located on the southwestern portion of the Peloponnese Peninsula in the wide valley of the Alfeiós River is a small Greek city called Olympia. Only about 40 kilometers from the Ionian Sea, this city has relatively easy access to water travel, which brings in plenty of tourists from regional cruise ships.

In addition to being beautiful, Olympia is a Mecca for lovers of history, mythology, and sports. As the home of the once-great temple of Zeus and the birthplace of the first Olympic Games, there is no shortage of things to do, see, learn, and explore in Olympia.

The first Olympic Games were held in Olympia in the year 776 BC and they continue on to this day. Unlike the modern games, however, the ancient Olympics were not about national pride or sponsorships. Instead, they were all about worshipping the gods.

Today, you can visit the ancient Olympic Stadium in Olympia. Unlike modern stadiums, the ancient one looks kind of like a dirt ring in the sand. In ancient days, the stadium would have held about 45,000 spectators – roughly half the capacity of the stadium used in the 2012 London Olympics. Unlike the London stadium, however, back then there would have been no seats.

Spectators would have been forced to stand or sit in the grass, and women would not have been allowed to access the stadium at all. The portion of the ancient stadium that you can visit today is not actually the original, but one built in the fifth century BC, making it about 2,500 years old.

Standing near Olympia were dozens of temples to various gods. Among the most important were the Temple of Hera and the Temple of Zeus.

The Temple of Zeus was constructed in about 470 BC as a way to honor the father of the gods. It remains a popular archaeological site to this day despite the fact that it has largely been destroyed by earthquakes and natural events. What remains are the ruins, including impressive columns, stones, and lightly wooded areas. Many of the statues and friezes once lived here have been moved to nearby museums for preservation.

The Temple of Hera, constructed in honor of Zeus’ wife, remains an important site today. It is the oldest temple in all of Olympia and was one of the most venerated in all of Greece for many centuries. Every four years, the Olympic torch is lit outside of the temple of Hera before it circles the globe to kick off the opening ceremony of the Olympic Games. This tradition has been carried through to modern times and is world renowned as a way to include a bit of history in today’s modern games.

The archaeological museum is considered one of the most important museums in the world. Housing relics from the Temple of Zeus as well as statues and exhibitions from Greek excavations, historic Olympic Games, and more, it is a must-see for any tourist in the area.

Among the most popular exhibits is the metopes once housed in the Temple of Zeus. These metopes depict the 12 labors of Hercules. In addition, the Archaeological Museum houses the richest collection of bronze art and the largest collection of terra cotta statues.

Traveling to Greece is a treat on its own, but getting to experience the beauty and the history of a place as entrenched in mythology and anthropology as Olympia is an unrivaled experience.