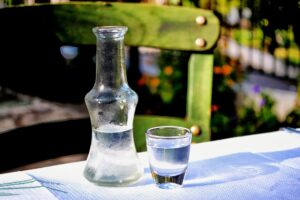 Ouzo is one of the most recognizable of all Greek liquors, due to its popularity while in Greece and also its unique flavor, which is anise based. For those who have an aversion to anise or licorice-based drinks, Ouzo might be a tough sell.

There are those who absolutely love it and seem to reach for it whenever they are eating Greek food. Ouzo was officially listed as a Greek product by the European Union on October 25, 2006. Here is more information about it:

Ouzo’s roots can be traced back to tsipouro, a spirit containing 40-45% alcohol by volume (ABV). One iteration of tsipouro involved anise and this version eventually became known as ouzo. The modern take on ouzo began after Greece gained independence in the 1830s, with the first distillery being established in 1856. When absinthe became unfashionable, ouzo was one spirit that took its place on bar shelves and in glasses.

How Is Ouzo Served?

Proper ouzo is mixed with water, becoming a tad cloudy and gaining a faint bluish-tinge. It can either be served with ice or taken straight as a shot. Ouzo is often served with an accompanying array of mezes, snack foods that tend to be savory and complement the flavor.

How Did Ouzo Get Its Name?

There is some degree of argumentation regarding where the term ouzo comes from. Some believe it derives from the Italian term “uso Massalia,” which means “for use in Marseille,” and, in the 19th Century, was stamped on silworm cocoons coming from Tyrnavos. The story goes that this became a synonym for superior quality, a trait many espoused the spirit to share.

While ouzo has already replaced the term “tsipouro” in common Greek parlance, this replacement seems to have happened after an Ottomon-Greek physician named Anastas Bey wanted to try tsipouro while in Tyrnavos. After trying the drink, he remarked that it was “uso Massalia.” The tale spread and this is how ouzo got its name.

How is Ouzo Made?

Ouzo is made by distilling within copper stills containing 96% ABV rectified spirit. Anise and other flavors like star anise, cardamom, cloves, cinnamon, coriander, fennel and mastic may then be added. This results in flavored ethyl alcohol or “ouzo yeast.” Note that this use of “yeast” is a quirk of the Greek language and refers to the starting point for making ouzo.

Ouzo yeast is distilled for several hours, resulting in a distillate of 80% ABV. The spirit from the beginning, known as “heads,” and end, known as “tails,” are extracted to avoid conflicting alcohols and smells. The heads and tails are often re-distilled together, resulting in a different tier of ouzo. Anyone seeking to make high-quality, completely distilled ouzo, continue the process by diluting it with water. This dilution results in the final value of the ouzo’s ABV, which ranges between 37.5-50%.

Ouzo is a unique Greek drink with an interesting flavor profile. While people may argue about how it got its name, no one can dispute its curious taste.