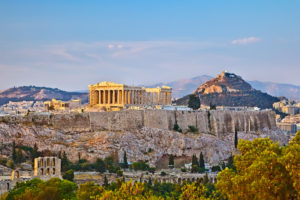 The Parthenon is regarded as one of the world’s greatest cultural monuments. Located at the Acropolis in Athens, it’s a must-see when you’re in the area, but far from the only thing there is to see! Here’s a look at what to see and do while visiting this area of the city.

Getting to the Acropolis

To get to the Acropolis you can take public transportation or a cab. If you’re staying at a nearby hotel, you can simply walk. If you take a bus tour of Athens, you can be dropped off close to the Acropolis. There are two main access points to get up to the Acropolis once you arrive. The main gate is at the western end and the other access point is at the southern end. If you need to check any bags before climbing the stairs, you’ll want the main gate, as there is a bag-check at that location.

History of the Acropolis

During the Neolithic period, the Acropolis was a military fortress because it offered a perfect view of both land and sea. During the Mycenaean times the Acropolis became a religious center that was dedicated to worshipping the goddess Athena. On top of the remains of earlier temples, three important temples were built: the Parthenon, the Temple of Nike, and the Erechteion.

These three temples were dedicated to different aspects of Athena. The Parthenon, which is located at the top of the Acropolis, was created between 447 and 432 BC. Famous Athenian sculptor Phedias supervised the project. During the battle of Salamina in 480 BC the Persians destroyed the Acropolis. It was Pericles who founded the Athenian democracy who rebuilt the Acropolis as it’s seen today.

What to Do at the Acropolis

Once you’ve arrived, you can take a guided walking tours of the Acropolis. This is a good choice for anyone who wants to see the area in a timely manner and be treated to the history by someone who knows it well. If you decide to explore the Acropolis on your own, you may want to hit specific spots such as the Theatre of Dionysus, which is located at the foot of the Acropolis, Odeon of Herodes, and of course the Parthenon.

There are also plenty of other places to visit, such as the Acropolis Museum, which consists of the archaeological findings of the Acropolis. The museum also has two shops, a café, and a restaurant if you need a bite to eat to refuel after all that sightseeing!

Also consider visiting the Gallery of the Slopes of the Acropolis, which features glass floors and houses finds from the sanctuaries on the slopes. This is a good place to visit on a hot day when you need to cool down because it has air conditioning.

Just as it did in the past, the Acropolis offers unrivaled views of Athens and the Mediterranean, making it a great place to take photos. While you’re in the area, you might be interested in taking a boat tour, which will give you a unique view of the Acropolis.

Consider spending time at the Acropolis while in the city. While here, you’ll feel like you stepped onto the pages of a history book!