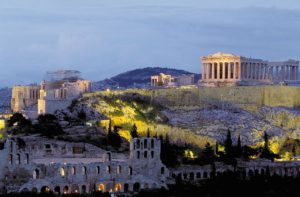 Greece is a place of many treasures. The idyllic climate for beach goers, it is also a great spot for those who love to learn about history. There really is no shortage of things to do here. When you’re not trekking to one of the area beaches, eating great meals in the tavernas and restaurants, or taking in the night life, consider visiting one of these top attractions:

Because of its prime location on a hill towering over much of the city, the Acropolis was often used as a military fortress. It is also the site of a temple, known as the Parthenon, that was dedicated to the Greek Goddess Athena. While here, you will have the ability to visit the Parthenon, as well as other sites such as the old Temple of Athena, the Propylaea, and the Sanctuary of Zeus. Also consider visiting the Odeon of Herod Atticus, located at the bottom of the Acropolis, during your visit.

The Archaeological Museum of Athens houses many historical artifacts that are worth viewing. However, the classic structure of this museum, which was built at the end of the 19th century, is worth taking a look at on its own. The beautiful garden adorned with sculptures in front of this museum is a local gathering place attracting many scholars.  Everything in this museum is arranged in chronological order. The visitor is enchanted with learning Greek history through a visual interpretation from some of the most fabulous art pieces ever created. It contains over 11,000 masterpieces.

Changing of the Guards

If you want to view a classical Greek military ceremony, consider watching the Changing of the Guards! This Sunday morning ritual takes place in Syntagma Square. The square is considered the political center of Athens because the nation’s parliament building forms the backdrop. The monument of the Unknown Soldier is guarded by members of the presidential guard, chosen by the strictest of physical, mental and moral standards. Although the guard changes hourly every day, the special Sunday ceremony is set aside for wearing their traditional, white kilts with 400 pleats, representing the number of years Greece was occupied by Turkey.

If you want a great place to view the sunset or at any time of the day, consider hiking to the top of Lycabettus hill, which is almost 1000 feet tall. Also consider spending time at the café at the top for a snack, coffee, or a cocktail. If you’re not willing to take the strenuous, though beautiful, hike up the hill, there is also a railway that can transport you. Keep in mind, though, that the railway goes through a closed tunnel so you won’t get any views until you reach the top.

Also located at the bottom of the Acropolis, this theater is the first of theaters in the world. Plays by the world’s most celebrated writers of tragedy like Aeschylus, the Father of Tragedy, Euripides and Sophocles, were performed here in the past. Dionysus theater has been reconstructed several times since it was built in the 8th century. Efforts to revive the theater are ongoing and performances are often hosted here so that people can get a taste of what theater was like in Ancient Greece.

While visiting the Greek city of Athens, you should consider taking in these top historical sites as part of your trip!