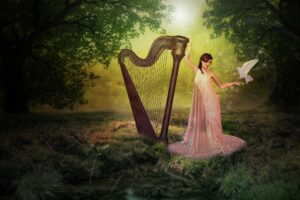 In Ancient Greece, the mythological stories and the characters that were a pivotal part of their religion. The Nine Muses were a part of this belief system. Physically appearing as young women, the Muses were the emissaries of Zeus himself and provided inspiration to people who were interested in everything from history to literature to science. Here’s more information about who the muses were and the role they played in the stories and in Ancient Greek society:

Who Were the Muses?

The earliest written mention of the Muses comes in Hesiod’s Theogony from the 7th Century B.C. In this account, Hesiod states that the Muses were the daughters of Zeus, king of the Olympic Pantheon, and Mnemosyne, the Titan goddess of memory. Other writers, such as the poet Alcman, wrote that the Muses were far older than Hesiod’s description, crediting Gaia and Ouranos with their creation.

Greek myths also placed the god Apollo as head of the Muses. After their creation, Apollo is said to have brought the Muses to Mount Elikonas, sight of the former Temple of Zeus, where they dedicated their lives to inspiring people to reach the zenith of their craft. In many Greek myths, Apollo has children with many of the Muses who go on to become heroes in their own right. One of the most famous such individual was Orpheus, son of Calliope and Apollo, who, in addition to being an amazing musician, descended into the underworld to save his beloved Eurydice.

What Were Their Names?

In total, there were Nine Muses in Greek mythology and each had a special function. Their names were:

Role of the Muses in Society and the Arts

When beginning a work, authors and other creators would thank the Muses for their inspiration. In one of the most famous opening lines in literature, Homer begins The Iliad by writing, “Sing to me, O Muse, of the rage of Achilles, fiercest of all the Achaean warriors.” While some saw the Muses as the inspiration for creative endeavors, others saw them as the personification of creativity. Many Muses were said to be the creators of metrical verse as well as the inventors of musical instruments.

Owing to their great power over creativity, cults dedicated to the Muses became common throughout Greece in the ancient world. Two of the most famous centers for worship of the Muses were Mount Helikon and Pieria. Smaller cults for the Muses were also created in many other localities. Typically, these cults used springs and fountains as gathering points for their symbolic association with the Muses.

In the end, the Muses are an enduring part of Greek mythology. While the ancients saw the Muses as their direct connection to creativity, today, their legend continues as anyone or anything that inspires someone is typically referred to as a muse.