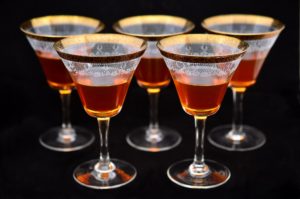 There is a great selection of delicious and aromatic Greek liqueurs available. They come from different regions and are made from various ingredients. In 1995, the Greek Federation of Spirits Producers (or S.E.A.O.P.) was founded. Here’s what you should know about Greek Liqueurs.

The name Tentura comes from the Italian word for tincture. Tentura is exclusively produced in Greece, starting in Patras in the 15th century. This Greek liqueuor is made from water, alcohol, sugar, the fermented essences of citrus fruits, nutmeg, cinnamon, and cloves. These flavors also provide a wonderful aroma to the liqueur. Tentura is a dark orange-red color, much like that of a tincture. Tentura is consumed neat or with a tonic or soda, after dinner as a digestif, as a cocktail ingredient, and in shot form, chilled.

Rakomelo is a digestive spirit that is also used as a remedy for a sore throat or cough by Greeks. Rakomelo is made by combining a type of grape pomace brandy, typically raki or tsipouro, with spices including cinnamon, cardamom, and other regional herbs, and honey. Rakomelo is produced primarily in Crete, other Aegean Sea islands and on the Greek mainland. This liqueur is typically consumed during the winter as a warm drink.

Masticha of Chios is a Greek liqueur produced on the island of Chios. Mastic is a resin that comes from the Mastic tree and has been known since ancient times to be therapeutic. The process of making Masticha is regulated by Greek law. The alcohol is flavored with mastic either by agitation or distillation. This solution is then diluted with water and sweetened with sugar. The alcohol content of Masticha must be at least 15%. Masticha is consumed as an ice-cold shot, in a goblet with ice, and after dinner with dessert.

Koum Kouat liqueur is made from kumquats and produced on the island of Corfu, especially in the northern region. Since 1924, kumquat trees have been cultivated on the island. This liqueur has the aroma of oranges and strawberries. Koum Kouat liqueur can be consumed a number of ways including straight, on the rocks, as an accompaniment to cocktails, and even in coffee, which is a known as Corfu coffee. This liqueur can also be drizzled on fruit salad.

Kitro is a Greek liqueur that is made of leaves. Citron trees have flourished on Naxos for centuries, but these days their numbers are dwindling. The fruit of the citron are similar to that of lemons, but stronger with a slightly different taste. When the leaves aroma is at its peak (October to February), they are picked. Along with their stems and peals, water, and alcohol, the citron leaves are placed in a copper still. Kitron comes in three varieties: the green is sweeter and contains less alcohol, the yellow contains the least amount of sugar and is the strongest, and the clear variety is in the middle.

Traditional Greek liqueurs are sweet spirits made from Greek fruits, nuts, seeds, flowers, and other ingredients. Be sure to try them whenever you get the chance!