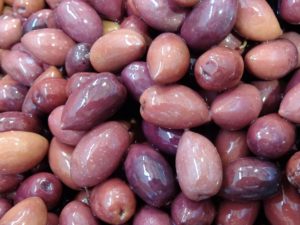 Greece is known for its delicious olives and there are so many more varieties than people may realize! Some olives can be easily found all over the word, such as the Kalamata olive. Others, like the plum olive, are more uncommon and may not be as readily available outside of Greece. No matter which olive you try, you won’t be disappointed! Here are some of the most common types of Greek olives:

Sporting a deep dark hue and fruity flavor, Kalamata olives are often featured in Greek salads and can be seen lining grocery shelves at your local market. These olives are grown near Kalamata, Greece, hence the name. These beauties are often black, but some appear to have a purple color. With their smooth and shiny outer shell, they are often soaked in red wine vinegar prior to consumption for an even more delectable bite.

The smoky (and very oily) Cretan Green Olive is known for rendering some of the best olive oil in the world. Harvested in Messinia, Greece, these olives will eventually turn black when fully ripe. Once ripened, the Cretan olive will be pressed to make a luscious olive oil. Prior to this point, however, Cretan olives can be picked while still green and enjoyed as simple table olives.

Throube (throumbe) black olives have a dark and wrinkly outer appearance. These olives are not generally “picked” from a tree but rather, they are “caught” by harvesters once fully ripe. These types of olives are not the best choice for olive oil, and are typically consumed as is or after they have gone through the process of being dried and cured.

Harvested in Argos, Greece, the Nafplion olive is a lesser known olive that has a crunchy texture and a bright green outer shell. They are not often used for oil, and are traditionally consumed as table olives served fresh with lemon juice.

The Halkithiki olive is known for its large size. It is one of the biggest olives in Greece! When Greeks want a sturdy olive to stuff other ingredients into, such as feta cheese, this is the olive that they turn to. With its green appearance and slightly peppery flavor, these olives are grown in the Halkidiki region, hence the name.

Similar to the Halkithiki olive, these olives are known for their size. With their plum-like appearance and large shape, these olives are prized for not needing chemical additives. They are most often harvested using traditional, ancient methods, and are typically enjoyed after being fermented with brine.

Every type of Greek olive comes with its own unique qualities. From the well-known Kalamata to the deliciously oily Cretan, each olive is equally useful (and delicious) in its own right. There are so many varieties to choose from, it’s a good idea to try them all!