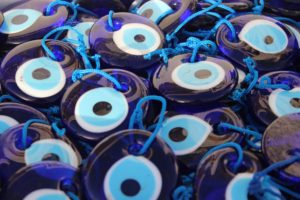 What Does the Evil Eye Do?

If someone has given you the evil eye you may experience a number of symptoms. You may experience a bad headache, weakness, stress, tension, feeling the need to sleep, brain fog, unusual negativity, or just plain bad luck. If you suddenly experience one or more of these symptoms, with no other explanation, you may have been given the evil eye by someone. In Greece this explanation for such symptoms would not be out of the ordinary. Greeks are firm believers in the mati curse. Anyone can be affected by the evil eye, but some believe women and children are especially susceptible.

How Do You Protect Against the Evil Eye?

There are a few ways that people can ward off the evil eye. Wearing a mati pendant is probably one of the most popular ways and the practice actually dates back to the 6th century BC. You may know this as the eye charm, which is usually blue, but sometimes green. One belief is that the eye is blue because light-colored eyes are not common throughout the Mediterranean and may be more likely to give the curse. If you’ve already been cursed with the mati, you may want to perform a xematiasma or “an undoing of the eye.”

There are different rituals that go along with the xematiasma, some of which may include an incantation or prayer, oil and water, and making the sign of the cross. It’s believed that the prayer said during the xematiasma, which is called “Vaskania,” is to be passed down alternating genders. Women teach it to men and men teach it to women. Different families and areas may have their own rituals to get rid of the evil eye. Mothers may choose to pin evil eye beads to their children’s clothes to protect them and Greek brides have a tradition of hiding scissors as protection.

The History of the Evil Eye

The evil eye appears to date back to Classical Antiquity in Ancient Greece. Authors of the time would describe the evil eye in their writings. It even appeared in the poetry of Virgil. Plutarch (a Greek biographer and essayist) had a scientific explanation of the evil eye, which said that the eyes are the main, if not sole, source of deadly rays that are like poisoned darts from deep within a person possessing the evil eye. Belief in the evil eye is also strong in East and West Africa, West Asia, and Latin America.

The evil eye is a well-known part of Greek culture. Even if you’re not Greek, it’s good knowledge to have so that you can protect yourself against the evil eye. Better safe than sorry!

Learn About the Greek Evil Eye