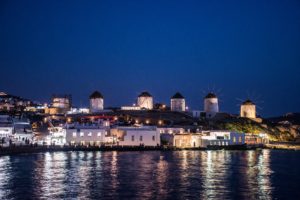 When most people think of Greece as a vacation spot, they envision climbing the Acropolis, visiting museums, strolling through historic towns, or lounging on sunny beaches. Greece has that, and so much more to offer. You can find endless opportunities to enjoy contemporary nightlife in many destinations. Here’s more information:

Athenians eat late dinners and most bars don’t begin to fill up until 10 p.m. or later. Many of the popular night clubs don’t even get swinging until after midnight. Tavernas serve plates of mezes (appetizers) along with drinks. Musicians sit outdoors to play traditional Greek music in summer; in cooler weather they entertain local crowds in tavernas. Locals drink the traditional ouzo, a dry anise-flavored aperitif mixed with ice or water.

Each neighborhood in Athens has its own personality and unique nightlife. Exarchia has a vibrant food and arts scene with a wide choice of bars. Gazi is home to large Rebetiko (urban Greek pop) venues with renowned Greek performers. Koukaki is situated close to the Acropolis for after-sightseeing bar hopping. The trendy Psyrri neighborhood is filled with bars serving sophisticated wines and cocktails. One of the city’s oldest bars is in Patsion which is perfect for those wanting to experience “old Athens”. Kolonaki offers a bit of glamor and sophistication in central Athens with both small intimate bars and large glitzy venues.

Mykonos is often referred to as a “party island” for its multitude of clubs and bars catering to young partygoers. In fact, the parties on this island are considered to be legendary. Evenings often start watching the sunset on the beach with an aperitif, continue with dinner in one of the island’s restaurants, then end with a cocktail in a trendy bar or nightclub. Paradise Beach, located on the southern tip of the island, is the most famous destination for young Greeks and backpackers to dance until the wee hours.

Thessaloniki is the second largest Greek city, and it has more cafes per capita than any city in Europe. National Geographic lists Thessaloniki as one of their choices for Top 10 Nightlife Cities. Nightlife venues are spread throughout the city, but the most famous are within walking distance of Aristotle Square in the center of the city. Thessaloniki has one of the most luxurious casinos in Europe for gaming excitement. Many clubs and tavernas offer a mix of pop, jazz, Latin, and traditional Greek music. Bouzouki (Greek pop) clubs highlight renowned Greek singers.

The port city of Heraklion is the capital of the Greek island of Crete. Nightlife includes options for eating and drinking in tourist resorts and local villages. Heraklion Town and the waterfront area of Limenas Hersonissou are filled with restaurants, cafes, bars, and clubs for the young partygoing set while other tourist regions have venues with a more relaxed atmosphere.

Whether you’re looking for the hippest crowd with the newest cocktails or a traditional ouzo with the locals, Greece has nightlife for you. Listed in this article are some of the top places, but there is satisfying nightlife in Greece no matter where you are!