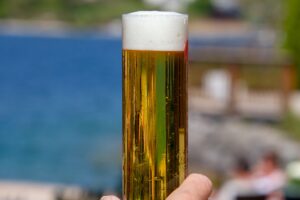 When thinking about drinking alcohol in Greece, people’s thoughts tend to immediately go to wine, ouzo, and other traditional Greek spirits. Something as common as beer is rarely thought about in direct association with Greece, but the country does actually have a relatively vibrant beer culture. Since Greece’s first king arrived from Bavaria and brought his native beer traditions with him, the people of Greece have been exposed to the beverage.

It doesn’t hurt that they’ve developed a liking for it either! Like many other places around the world, Greece has its own breweries as well, so don’t miss your chance to enjoy some local Greek beer during your visit. Here’s a look at some Greek destinations you can visit that boast options for beer tasting:

There is certainly no shortage of things you can do in Athens. When you’re not visiting the city’s many historical landmarks and museums, shopping, or eating a great meal, you should consider trying a beer from one of the breweries in the Athens area. The First Craft Brewery takes the credit for being the first “microbrewery” in Greece. Other breweries to visit in Athens and the surrounding area include the Noctua Brewing Company, Fix Brewery, and the Athenian Brewery.

The island of Santorini is known for its unique landscape, volcanic beaches, and gorgeous sunsets. The food grown here is also worth mentioning, such as its tomatoes, because of the unique growing conditions caused by the volcanic soil. While you may fill your days with lounging in the sun and eating delicious meals, you can also sample some beer at one of the breweries, and yes, there is more than one. Try beers from the Santorini Brewing Company and the Donkey Brewing Company. Local restaurants and tavernas often carry their beers, or you can go directly to the breweries for a tasting.

Crete is the largest island in Greece, and because of this, there is plenty to do while here. You can visit one of its many beaches, go hiking, visit a museum, or tour some of the historical sites that are scattered throughout the island. When you aren’t seeing the sites, you can taste test some local beers. Some of the breweries you may want to visit include the Cretan Brewery, Solo Brewery, and Lafkas Brewery.

If you find yourself in the north in places like Macedonia, Greece you can also find plenty of breweries. For example, the Vergina Brewery, which makes the popular Vergina Premium Lager, is made here. You can also visit Macedonia Thrace Brewery while here. This is also a unique region of Greece to visit, and you won’t be disappointed by all there is to do.

As you can see, there are plenty of options for tasting beer while in Greece. Besides visiting breweries directly, you can also find local beers in some restaurants, bars, and tavernas. Although beer isn’t traditionally thought of as a part of the Greek culture, Greeks do like beer and have breweries of their own.