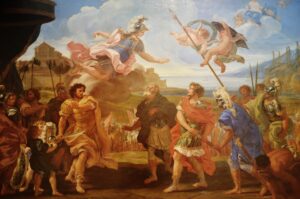 It is well known that the Trojan War was a popular story of Greek Mythology. However, there has also been somearchaeological evidence that shows that it may have actually been a real conflict. For example, there have been artifacts found in Troy, and they are on display at the Troy Archaeological Museum. However, most of what we know is from the stories. Here’s more information:

The Trojan War is one of the most famous events in Greek mythology. It was fought between the Achaeans (Greeks) and the Trojans after Paris, a prince of Troy, kidnapped Helen, the wife of Menelaus, the king of Sparta. The war lasted for ten years and ended with the Achaeans defeating the Trojans. Many famous warriors participated in the Trojan War, including Achilles, Hector, and Odysseus. The war has been immortalized in many works of literature, including Homer’s Iliad. It is considered one of the most important events in Greek mythology.

The story of the Trojan War can be traced back to Homer’s Iliad, which is considered one of the most important works of literature in Greek mythology. The Iliad tells the story of the Trojan War and the heroes who participated in it. It is a long poem that covers ten years of the war. The Odyssey, which is also by Homer, tells the story of Odysseus, one of the Achaean warriors who fought in the Trojan War. The Odyssey is also a long poem covering ten years of Odysseus’s journey home after the war. These two poems are together known as the Epic Cycle.

Trojan War in Literature and History

Many historians believe that the Trojan War occurred, but its actual cause is disputed. Some say Paris kidnapped Helen to gain her as his wife, while others claim she ran away from an abusive husband. This would have caused a diplomatic incident between Troy and Sparta, leading to the war. However, neither of these theories is widely accepted by historians today.

Other works of literature referencing the Trojan War include Virgil’s Aeneid, Dante’s Inferno, Shakespeare’s Troilus and Cressida, Tennyson’s The Idylls of the King, and Ezra Pound’s The Cantos. These works all depict different aspects of this famous conflict in Greek history.

Despite its fantastical elements, there is still a great deal of historical evidence to support this event has taken place at some point in time. However, it is unclear exactly where or when that place and time may have been. Until proper evidence has been discovered, the Trojan War will continue to be one of history’s greatest mysteries.