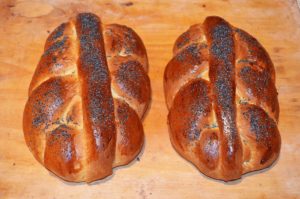 On New Year’s Day and throughout the month of January, Greeks all over the world serve a special bread-like cake called “Vasilopita,” and there are many traditions associated with it. The cake is served on New Year’s Day, often at the stroke of midnight. Here’s more information about this tradition:

Vasilopita is a bread-like cake made from flour, eggs, sugar, and butter. The recipe may vary slightly depending on the region it’s made in and who is making it. Sometimes it is made with a custard base instead dough. Some recipes of vasilopita may use orange juice instead of milk while others use olive oil instead of butter. The vasilopita can be topped with confectioner’s sugar after baking.

On January 1st of each year, usually when the clock strikes midnight, the vasilopita is cut. Because of its religious aspect, the vasilopita is traditionally cut by the head of the household. The cake is cut into slices with the first being for Christ, the second being for the virgin Mary, and the third for the house. The next slices will be for the hosts and then oldest relatives and friends down to the youngest. Once everyone has been served a slice, they check to see who received the coin.

History of the Coin

The Greek Orthodox tradition of the lucky coin inside the vasilopita bread began in Asia Minor in the city of Caesarea over 1600 years ago and is connected to the legend of Saint Basil. There was a prefect who was a tyrant and he demanded that the treasures of the city be delivered to him or there would be consequences. He threatened to loot the city if his orders weren’t obeyed.

The tradition of cutting the Vasilopita does not only take place in Greek homes, but also churches, clubs, and businesses. Vasilopita is also used as a fundraiser where people pay for a slice of cake to help benefit charity. This is a tradition that continues as a celebration of Saint Basil and the individual’s hope for the year ahead.