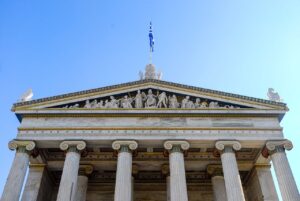 Greece had some turbulence in the years following the conclusion of the Greek War for Independence. After the first governor was assassinated, the strongest nations in the world at the time, France, England, and Russia, decided that Greece needed a king. They brought in Prince Otto from Bavaria, who became the first King of Greece. After he was deposed, King George I was the second king of Greece. Here’s more information about King George I:

About King George I

King George I of Greece was born in Copenhagen on the 24th of December 1845. He was elected as the King of Greece by the Greek National Assembly at the young age of 17 after they had deposed King Otto.

He married his wife, the Russian Grand Duchess Olga Konstantinovna of Russia, in 1867. His nomination and appointment to the position of King of Greece was largely supported by major world powers such as the United Kingdom of Great Britain and Ireland, the Russian Empire, and the French Empire.

Eager to fix the mistakes that his predecessor made, King George started by learning the Greek language to stamp his authority and make communication easier. He frequented the streets of Athens – something that was rare with his deposed predecessor. His aim was to create an image of a servant leader who was ready to serve the interests of the Russian people.

The King also wanted to create the impression that he wasn’t being influenced by his Danish people. He even went ahead and adopted a slogan “my strength is the love of my people”. Luckily, he was able to gain the trust of many Greeks because of the bold steps that he took.

His first years in office were largely characterized by territorial expansion – a time when Greece was trying to establish herself in Europe prior to the first World War. Under his watch, Greece peacefully acquired the Ionian Islands in 1864. He later annexed Thessaly in 1878 from the Ottoman Empire.

Connection to the British and Russian Royal Families

George’s sister, Alexandra was married to the Prince of Wales, who later became King Edward VII of England. His other sister, Dagmar, married into the Russian royal family and became the mother of Tsar Nicholas I.

After the demise of Queen Victoria of Britain, King George remained as the longest-serving monarch in Europe, second to the Queen. He used his marriage along with the marriages of his sisters to create and strengthen ties with both Russia and Britain. He was particularly close to the Prince of Wales.

By the year 1913, King George I had ruled Greece for 50 years. As such, there were plans for jubilee celebrations. On March 18th of the same year, walking alone as he tended to do, King George was shot and killed in the streets. It was alleged that the shooter was a member of a Russian socialist movement, but other sources claim that it was an act of a robbery gone wrong by a vagrant.

In general, King George is often considered one of the greatest leaders of the 17th and 18th centuries. He took up the reins of power at a very young age and proceeded to rule Greece for fifty years. Although the way he came to power was unconventional given his Danish heritage, the great world powers of that time had so much faith in him as a leader that he was elected to serve as King of Greece. His leadership style of servant leadership connected him with the local population and made the longevity of his reign possible.

King George I of Greece – Wikipedia