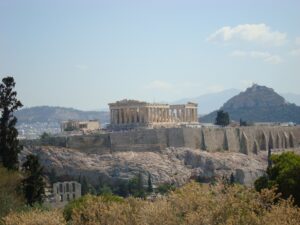 The Parthenon, which is located at the Acropolis in Athens, Greece, is one of the most iconic and recognizable of all the ancient structures in Greece. Listed as a UNESCO World Heritage site, glimpsing the Parthenon is considered to be a once in a lifetime experience. It was completed in 438 BC and has been admired by people for centuries. The temple was built to honor Athena, the goddess of wisdom and warfare.

Here are some interesting facts you should know about this ancient temple:

It Replaced an Older Structure

The first building on the Acropolis was destroyed by the Persians when they invaded Greece in 480 BC. This temple was also dedicated to Athena, and it is thought to be one of the most important buildings of the Archaic period (not only because it was an important cult center, but also because it was built from the spoils of war).

In order to recover from this invasion, Athens wanted the mother city of Eretria to rebuild a new temple in its place. However, in 447 BC, the Persians were defeated again in battle, and that plan was abandoned. Nevertheless, work on a new building started in 438 BC with funds donated by the city itself.

It Is a Doric Temple

This is the simplest of all three Classical orders used in ancient Greece. It’s also one of the best-preserved temples of its type! The columns like capitals are smooth (no flutes), have no base, and are about 4,5 feet tall. The metopes (stone panels) of the Parthenon also depict scenes from Greek mythology like, for example, Poseidon fighting against Athena and the birth of Athena.

In addition, it is a perfect example of a “peripteral” temple. This means that it has a row of columns all around its exterior, not just at the front and back as is typical with other types of temples. The Parthenon also includes 36 metopes on each side! On top of that, there are 15 columns along each long side and eight along each short end (the ones in the corners).

It Had Multiple Purposes

The original function was to house cult statues for Athena, but later they were changed into treasury chambers after the Great Persian War. The colossal gold and ivory statue of Athena was made by Phidias (one of the greatest sculptors of all time). It was housed in the cella (the holy chamber) of the temple. The statue is thought to represent Athena Parthenos, not current-day Athens! This building also functioned as a treasury; it was filled with votive offerings like this golden shield which you can see this photo.

The Parthenon is a beautiful building that has stood the test of time. It is very important because it was built with money raised by the citizens themselves, which is impressive! Of course, not all its parts are visible today and many were taken to Great Britain as war trophies.