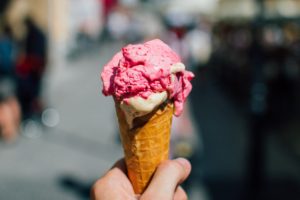 While visiting Greece, you may consider treating yourself to some ice cream! Greek ice cream that can be found in Greece today is similar to the ice cream that we know and love. Greeks have a long history of loving frozen desserts and versions of ice cream can be found dating back to ancient times. Here’s more information about this frozen treat and its history in Greece:

History of Ice Cream in Greece

Historians believe that Greeks have been enjoying frozen desserts since Ancient Greece. In fact, it has been thought that Alexander the Great himself enjoyed frozen desserts during his lifetime! In ancient times, it was common to flavor snow with fruit and honey and this was considered to be a traditional dessert. There are records of this dessert being sold in the markets in Athens in 5th Century B.C.

By the 20th century, Greek cuisine including different types of frozen desserts were developing. This included a frozen dessert that we know of as our modern-day ice cream. Known as pagoto in Greek (παγωτό), this dessert came to Greece as soon as it was developed.

Ice cream’s presence in Greece is pretty well established, and there are even some unique flavors that can be found here. While in Greece, it could be fun to to try some of them out! Here’s more information:

Greek Mastic Ice Cream (Greek: Παγωτό Καϊμάκι), another variety, has a slightly chewy texture. Mastic, the resin from an evergreen tree native to the island of Chios, is mixed with sugar to form a thick, white, sweet paste, served as a dessert, that becomes chewy, like hard caramel, when cold.

Salepi, a Greek delicacy with a long history, serves as a thickening agent to increase resistance to melting, and is an ingredient in some ice creams. The original, traditional version of Salepi was very popular in the Ottoman Empire and was widely available on the streets of Greek cities during that time. Sipped as a beverage, similarly to the way coffee is enjoyed today, it was also considered to have medicinal and aphrodisiac qualities.

Traditionally made of pulverized tubers of Orchis mascula, Orchis militaris, and other varieties of orchids, peddlers would serve Salepi on city streets. With the endangered status of orchids in Greece, many street vendors today sell a version of Salepi made from cornstarch, sugar, water and artificial flavors. For the traditional version, look for salepi that has been prepared from paste made of cultivated orchid tubers, combined with milk, sugar, cinnamon and ginger.

Frozen desserts have a long history in Greece. When visiting the country, consider trying some of the unique flavors that can be found!