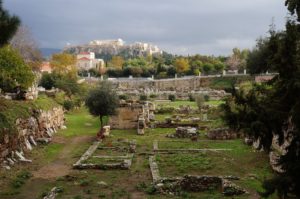 While visiting Athens, Greece, you may want to stop by the ancient cemetery at Karameikos. This archaeological site is open to the public and it offers visitors an opportunity to learn about the culture of Ancient Greece. This ancient cemetery has helped historians unlock some of the secrets of the past. Here’s more information:

Before it was a burial plot, Karameikos was a gathering place for potters. The son of Dionysius and Ariadne, Keramos, was a demigod and patron of potters. The area was named in his honor. Between 100 B.C. and the 1st Century B.C., the cemetery served as the chief graveyard for the city state of Athens.

The noble and upper-class families were all buried in the Kerameikos cemetery. Heroes, statesmen, and nobility all had their graves and crypts in the cemetery. Families vied with one another by building large, ostentatious funerary sculptures, until, in 317 B.C., a decree was issued forbidding them.

There were two gates in the walls that surrounded the city. The Sacred Way ran through the Eleusian Gate to Eleusis, the site of a temple with an underground theatre, called the Telesterion. This road was used twice a year for religious initiations into the Eleusian Mysteries.

The other gate was the Dipylon Gate, which had two arches. This was a public gate. Between the gates, on the inside of the wall, was a building called the Pompeion. During the Panathenaic Festival in honor of the goddess, Athena, the nobility and upper classes of Athens would attend a feast here.

The building was destroyed in 86 B.C., when Sulla, the Roman dictator, sacked Athens. This attack was particularly difficult to the city, and during this time the cemetery underwent many challenges.

In 1863, a workman dug up a stele, which is a type of grave marker that was commonly used in Ancient Greece. In 1870, excavations were started by the Greek Archaeological Society. The site is still being excavated by the German Archaeological Institute at Athens.

Recently, during the construction of the Kerameikos Station for the Athens Metro, workers discovered a plague pit. Thousands of bodies were buried together, a result of the epidemic, possibly typhoid, which killed a third of the population of the city in 430 B.C. Another one thousand tombs were also discovered.

Kerameikos lays outside the walls of the old city. Now it is surrounded by the modern city, but it remains a quiet, lovely spot, especially in the winter, when the green grass contrasts with the dark gray of the stones. You may see a couple of tortoises wandering around. A small museum, with a big reputation, has dozens of examples of fine pottery and sculptures. Kerameikos is worth a visit while in Athens so you can learn even more about it!