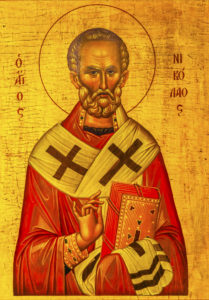 In the United States, Santa Claus is a beloved Christmas tradition. In Greece, he looks even different. Although the concepts are similar, “Greek Santa Claus” is also referred to as “Agios Vasilios” or Saint Basil. Agios Vasilios is portrayed as a distinguished looking man who wears a long, clerical robes and a long beard. He brings gifts to children, but not on Christmas Eve. In the Greek tradition children get their gifts on New Year’s Eve. Here’s more information:

Who Was Agios Vasilios?

Agios Vasilios, also known as Saint Basil of Caesarea, was born in Pontus in 330 AD. He came from a wealthy family and was one of ten children. He would travel to Palestine, Egypt, Syria, and Mesopotamia to study before returning to Caesarea where he taught rhetoric and law.

Just as Agios Vasilios was entering a monastic life, he encountered Eusthius of Sebaste, who was renowned as a monastic leader. This lead Agios Vasilios to leave law. Along with his brother, Agios would found a monastery on his family’s estate. Members would include their mother, their sister, other women, and a friend of Agios Vasilios’ called Gregory. Basil would begin writing.  Over the years, his writing would serve as a guide to monastic traditions.

Agios Vasilios Was a Bishop

In 362 AD, Agios Vasilioswas ordained as a deacon. Agios Vasilios would eventually be elected to become Bishop of Caesarea. As Bishop, he made helping the poor and suffering a priority. He gave away his inheritance and started a soup kitchen to help those in need. In addition, he founded charities that would aid the ill, poor, and even travelers.

As a monk, pastor, and church leader, Agios Vasilios would write a number of influential pieces, including sermons. Some of these writings included: The Longer Rules and Shorter Rules, Address to Young Men, Hexaemeron (Six Days),and Against Eunomius.

The Feast of Saint Basil is held on New Year’s Day as he died on January 1st. Special religious services are held in his honor. Families spend New Year’s Eve together waiting for the new year. It is said that the first person to enter the home after midnight on January 1st determines the luck of the household for the coming year.

Another New Year’s Eve tradition encourages children and adults to go from house to house singing Christmas carols. One such carol is called “Kalanda Pro-tochronias,” which honors the arrival of Saint Basil and the start of the new year. On New Year’s day (Saint Basil’s Day), families will share a loaf of bread called vasilopita (Saint Basil’s bread).

Bakers insert a coin into the loaf of bread and whoever gets the coin in their slice will have good luck all year. The head of the household will make the sign of the cross over the bread before slicing it. The first slice is offered to Christ, the second to Saint Basil, and the third to the Virgin Mary. Greek families traditionally open their gifts on Saint Basil’s Day.

Greek Santa Claus might look different from the one we are used to seeing, but his care for others, especially the less fortunate and children, is the same.