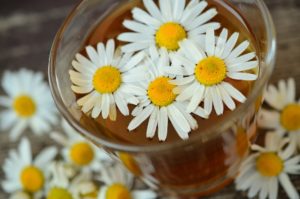 While Greek tea is often consumed for pleasure and comfort, there are many health benefits to the tea as well. Tea is a popular drink of choice in Greece and for good reason. Tea isn’t just drunk, it can be used in cooking as well. Which teas are popular in Greece? Read ahead to find out!

Also known as tsai tou vounou in the Greek language, Mountain Tea grows at high altitudes. It is spear-shaped with yellow flowers and has a sweet, yet mild aroma. Greek mountain tea can be drunk either hot or cold. Mountain tea has long been used to reduce inflammation of the gastrointestinal and respiratory systems, ease stress, and to boost the immune system during cold and flu season.

If you ask for a cup of tea while visiting Greece, you will usually be given chamomile tea. Whether it’s your tea of choice or not, it does taste delicious and offer some health benefits. Chamomile blooms can be picked fresh and dried until ready to use. Chamomile tea is said to help symptoms of stomach aches, fever, insomnia, and even insect bites. It’s no wonder it’s such a popular tea in Greece.

Linden flowers, also known as tilio in Greek, contain a high concentration of flavonoids and phytonutrients that have antioxidant functions. Drinking Linden flower tea can help to ease emotional and mental stress and reduce blood pressure. It can also help to ease symptoms of colds by reducing mucus production and sore throat.

There is a Greek legend that says sleeping near Linden blossoms will transport you to the land of fairies.

In ancient Greece, sage, known as fasokomilo in Greek, was considered a holy herb. Sage is high in antioxidants and has been used for its anti-microbial and tonic properties. Sage tea is thought to promote and improve brain function, which may help boost memory. In fact, it may help to prevent dementia and Alzheimer’s.

Sage tea is made from the dried leaves of the herb. As a tea it smells slightly of pepper and if steeped too long may become bitter to taste. Sage is one of those teas that is good to blend with other herbs.

The lemon verbena herb, known as louisa, was not originally native to Greece. The herb was brought to the country from South America in the 1700s and is widely grown around Greece today. Lemon verbena is a refreshing tasting, lemony tea that can be drunk hot or cold. Lemon verbena tea has many benefits, some of which include: easing indigestion and cramping, balancing hormones, regulating the appetite, and antioxidant benefits that help protect and repair muscles.

Greek teas not only offer comfort, but health benefits as well. You can’t go wrong with one of these warm (or cold) Greek teas. When ordering tea in Greece, it’s important to be specific about the tea you want if you’re picky, but you can be sure you’ll enjoy whatever you get.