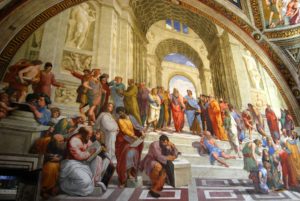 The original meaning of the word philosophy comes from the Greek roots philo- meaning “love” and -sophos meaning “wisdom.” Ancient Greek philosophy began in the 6th century BC and continued through the Hellenistic period and the period when Ancient Greece was part of the Roman empire. Here are five Greek Philosophers you should know.

Socrates was a classical Greek philosopher who is credited with being one of the founders of Western philosophy. Socrates was born in Alopeke and belonged to the Antiochis tribe. His father Sophroniscus, was a stonemason and sculptor. His mother Phaenarete, was a midwife. Socrates married Xanthippe and together they had three sons: Lamprocles, Sophroniscus, and Menexenus.

While Socrates made no writings of his own, classical writers, including his student Plato, would write of his accounts. Plato’s dialogues are thought to be the most comprehensive. According to Arsitotle, Socrates was interested in the search for moral virtues. In addition to ethics, his other main interest was epistemology. During 399 BC, Socrates went on trial and was found guilty of corrupting the minds of the youth of Athens as well as not believing in the gods of the state. He was sentenced to death.

Plato was a Greek philosopher and the founder of the Academy of Athens, which was the first institution of higher learning in the Western world. Together with his teacher Socrates, and his student Aristotle, Plato laid the foundations of Western philosophy and science. Plato was the innovator of the written dialogue and dialectic forms in philosophy. Plato often discussed the father-son relationship in his writings. His own father, Ariston, died when Plato was a child. Some of Plato’s most notable works include: Apology, Symposium, and Republic.

When Aristotle was around eighteen years old, he joined Plato’s Academy of Athens. He would remain there until he was thirty-seven. Aristotle’s writings covered subjects including: physics, biology, zoology, logics, metaphysics, music, psychology, economics, and much more. After Plato died, Aristotle would go on to tutor Alexander the Great. This opportunity allowed Aristotle to establish a library in Lyceum. This then allowed him to produce many of his books. Aristotle’s notable ideas included theory of the soul and Aristotlian philosophy.

Pythagoras was an Ionian Greek Philosopher as well as the founder of the Pythagoreanism movement. His political and religious teachings would influence Plato and Aristotle. In Plato’s “Timaeus,” Pythagorean teachings are exhibited. Pythagoras was credited with many mathematical and scientific discoveries including the Pythagorean theorem. His philosophies would also impact scientists such as Copernicus, Kepler, and Isaac Newton. Pythagoras’ interests included: ethics, mathematics, music, and religion.

Greek philosophy was used as a non-religious way to make sense of the world. It had a great and profound influence on the Western world.