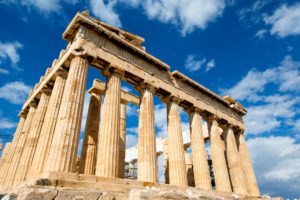 The Tebtunis Papyri is the largest collection of papyrus texts in the Americas. The collection is so large it has not been counted or inventoried in full, but is thought to exceed 30,000 pieces. The National Hellenic Society has been involved with learning about these papyri and also protecting them. Here’s what you need to know about the Tebtunis Papyri Project:

Finding and Preserving the Tebtunis Papyri

These Ancient Greek papyri were discovered in the early 1900s at the site of the ancient Graeco-Roman city of Tebtunis in Egypt. They were discovered by Bernard Pyne Grenfell and Arthur S. Hunt, two British papyrologists. The papyri were inside the remains of mummified crocodiles, which were mummified because they were worshipped by ancient Egyptians.

When they were found, the papyri were taken to U.C. Berkeley in the 1930s. They would remain at the Bancroft Library’s Center for Tebtunis Papyri until recently when it was decided the papyri should be cataloged, conserved, and digitized. The project is a collaboration between papyrologists and a number of America universities. The National Hellenic Society also has an interest in the project.

The project’s focus lies in the analysis and discovery of documents that have Greek literary significance such as Homer’s Odysseyand thelost works of tragedians. The National Hellenic Society has collaborated with the Elios Charitable Foundation to sponsor the ongoing study in hopes of impacting the prosperity of the literary discoveries.

About the Tebtunis Papyri

The Tebtunis Papyri collection consists of items dating back to the 2nd century BC. Included in these items are fragments from works such as “Dictys of Crete,” and Sophocles’ lost satyr-play “Inachos.” The “Dictys of Crete” is the Greek original of the myths that surround the Trojan War. Portions of lost works by ancient Greek scientists, philosophers, dramatists, and tragedians were also discovered. Many of the texts found in the mummified crocodiles originate from the komogrammateus, also known as the village scribe of Kerkeosiris.

They date to the end of the 2ndcentury BCE. Some of the texts found are also shedding new light on ancient Greek life in Egypt. The papyri help to show how the Hellenic community was educated and were active as traders and merchants. It also becomes clear from the papyri that the women played an important role in commerce at the time.

Documents containing land, tax, and crop records, crime reports, other legal documents, and administrative records are the largest group of papyri found. Most of the texts are written in Koine Greek or Demotic (late Egyptian). The Greek was written in reed pen, in all capital letters, with no punctuation or spacing. It is estimated that only about five percent of the papyri texts have been translated. There is still much to learn from them.

Through the Tebtunis Papyri Project, it is hoped that lost and lesser known works will be not only rediscovered, but shared with younger generations and the world. Preserving these texts is important for intellectual and physical history purposes. The National Hellenic Society has made it its mission to keep these papyri safe and learn what they can about them. Learn more at this link.