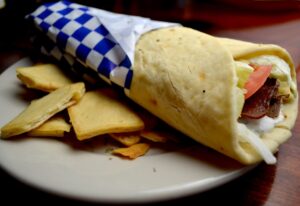 When you visit Greece, one of the things you might notice is that there are Greek gyro shops all over the country. After all, it is one of the most popular street foods. You can also find authentic Greek gyros in restaurants and festivals throughout the world. Not only that, but with the right ingredients, you can make gyros at home!

History of the Greek Gyro

Although grilling a vertical spit of stacked meat slices, and then cutting it off while it cooks, was developed in Turkey in the nineteenth century, it has since been adopted by the Greeks. The food was introduced to Greece after World War II, and the Greeks immediately put their own spin on it by topping the meat with tzatziki. By the 1970’s the Greek gyro was already extremely popular in its place of origin, as well as across the water in cities like New York and Chicago.

At that time while vertical rotisseries were starting to be mass produced, the stacks of meat were still being made by hand. The name of the gyro comes for the Greek word for “circle” or “to turn”. Eventually the name “gyro” came to replace its older, Turkish name of doner. Contrary to how it is said in English, “gyros” is both singular in plural in Greek.

Type of Meat Used in the Greek Gyro

In Greece the most common meat in a gyro is pork; however, chicken is also very popular and, less commonly, lamb and beef can also be found in a gyro. In hand-made gyros meat is cut into round, flat, thin slices which are then stacked up onto a spit, seasoned, and cooked, with fat trimmings spread throughout the stack for flavor. The pieces of meat are stacked up in an inverted cone and slowly cooked in front of a fire or broiler. Once the meat is cooked the outside is scraped off into thin, crisp shavings. How the meat tastes can also be changed by altering the heat, turning speed, and the distance between the heat source and meat as much as the cook would like to adjust for personal preference and how quickly the meat will be eaten.

What’s in a Greek Gyro?

In Greece a gyro is served with your choice of meat, in an oiled, gently grilled piece of pita bread with sliced tomatoes, lettuce, chopped onions, tzatziki sauce, and sometimes French fries. A lot of work goes into making a well-crafted gyro, as well as a lot of personal preference, leaving much room for experimentation. The most common spices are cumin, oregano, thyme, rosemary, but there are plenty others that can be added in, as well as any combination of spices.

No trip to Greece would be complete without eating at least one gyro. You can also find them throughout the world and even make your own!