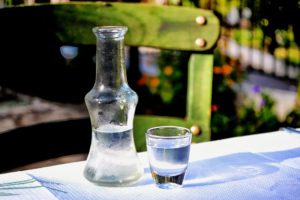 Greece is a popular destination for people to visit each year. Everyone comes here to have the ideal vacation experience, and for many that includes going out for a few drinks. Drinking in Greece is considered to be a way of life, with dinner tables filled with the region’s top spirits, such as Ouzo or Raki, or the local wine or beer. You can also order cocktails and other drinks at bars and nightclubs. Here’s more information on how to order drinks in Greece!

Before you start ordering drinks, it is a good idea to know how the Greek people view drinking in the culture. In general, drinking alcoholic beverages is looked at as a part of life and public intoxication is frowned on. Not only that, but there is a low tolerance policy for driving while under the influence of alcohol.

Greeks are masters at drinking while maintaining sobriety, as food is always present at the table when drinking. Not only that, but people get exposed to alcoholic beverages from a young age with their families, and many drink small amounts of beverages like wine while they are children. The official, public drinking age is 18 years old in Greece, however, you will often see those aged 16 or 17 years of age drinking in restaurants when their parents are guardians are present.

Understanding the Culture of Drinking

Part of the drinking culture in Greece includes drinking much later than we may be used to in the United States.  Greeks tend to both eat and drink late, and typical bars reach their peak around midnight, when some bars in the states are close to ‘last call’, and are usually open much later than that. You can also purchase alcohol at restaurants, cafes, and tavernas.

There are also some unique practices that occur when ordering certain alcoholic beverages in Greece. For example, at restaurants, individuals do not always order their own beer. Several bottles are ordered to be placed at the center of the table for sharing. Wine is often order in pitchers called “karafs” to be shared by everyone at the table. Also, ouzo is served in shot glasses and is sipped slowly.

Which Drinks to Order in Greece

As you can see, there are several options for what you can order when drinking in Greece. Here’s a rundown of your choices and when they are traditionally imbibed:

While you are in Greece, you are sure to drink some alcoholic beverages.  It will help to keep the information above in mind so you can pace yourself and have fun!