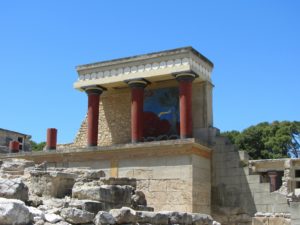 The island of Crete seems like paradise on earth. The lush greenery and idyllic climate give Crete a tropical quality, while the multitude of gorgeous beaches satisfy both visitors and locals. The island has a rich history, and it is also the main site of one of the earliest civilizations in Greece – the Minoan civilization.

Known for their sophisticated, agriculturally based culture, the Minoans also built palaces that exist in ruins today for people to explore. Here’s a look at some of the palaces you should visit while on the island:

If you only have time to visit one of these sites, Knossos Palace should be a priority. By far the largest and most well-known of the palaces, Knossos was one of the wonders of the ancient world. Experts are still studying Minoan culture but there is a theory that indicates that Knossos was possibly the main palace of the island, and the others were secondary. Think of Knossos as the Minoan equivalent of a larger city, while the others were the equivalent of much smaller towns.

Much of the old palace was destroyed by a large fire. When the site was excavated, many of the most notable artifacts and frescoes were moved to the Heraklion Archaeological Museum. Still, it is worth it to take a tour here and wander the grounds of the original palace to take it all in.

By modern standards, Phaistos isn’t far from Heraklion, which is where Knossos Palace is located. However, over 50 kilometers must have felt like quite the distance to the Ancient Minoans! This palace is located in the south-central portion of Crete in the town of Phaistos and is also open for visitors.

Malia Palace is located in the town that bears the same name, and it is also a Minoan site that is open for visitors. This palace is the third largest on Crete and there are daily tours available in several languages. It is located in a popular tourist resort area so while you are here visiting the palace you may also see what the town itself has to offer!

Zakros Palace is the second largest on Crete, which could indicate that it was almost as important as Knossos. It is fairly close to Paleokastritsa in the Zakros region of the island. Interestingly enough, Paleokastritsa also has a Minoan archaeological site located there. Unfortunately, no palace has been uncovered in this location. You can also tour Zakros and spend time here admiring the ruins.

There is so much to see and do on Crete that it can be hard to choose. You should make it a point to visit at least one of these palaces so that you can learn about the rich Minoan history on the island.