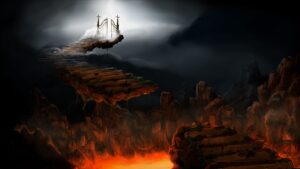 Hades was known to the ancient Greeks as the God of the Underworld. He was considered a god of Olympus, but was rarely ever there. The other gods held dominion over everything above ground like love, war, water, and the sky. The dominion of Hades was a world all its own with its own set of rules. Here’s more information about him:

Hades was born to Titan parents. His mother Rhea and father Cronus had many children, but because of a prophecy that stated Cronus’ child would be the end of him, Cronus swallowed each of his children as soon as they were born. When the seventh child, Zeus, was born, Rhea wrapped a boulder in cloth and presented it to Cronus instead of the child, tricking him into eating the rock instead of his son.

Zeus survived, released his brothers and sisters, and together they defeated their father and his minions, the other Titans. Hades and his two brothers, Zeus and Poseidon, drew lots to determine which realm they would rule. Zeus became ruler of the skies and the heavens, Poseidon ruled the seas and waterways, and Hades became ruler of the underworld.

God of the Underworld

Hades acquired many nicknames as the god of the underworld, realm of the spirits of the dead. He also became known as the wealth giver, Plouton, since precious gems, metals, and minerals were found underground where he lived. Because he rarely left his realm and he presided over the invisible, he was also called The Unseen One. His symbols changed over time and included a fork with two prongs, similar to Poseidon’s trident, a scepter that held the key to the underworld, and a cornucopia that represented his plentiful wealth. He traveled in a golden carriage drawn by four horses.

Hades is usually portrayed as a sorrowful god with a beard and helmet and the three-headed guardian of the gate to the underworld, Cerebus. He was also known as the grisly god, the Attractor of Man, the Host of Many, and the Other Zeus or the Infernal Zeus, since he reigned supreme below ground as Zeus did above it. Eventually, his name and his realm would become one and the same.

One of the few times that Hades came above ground, he so disturbed the balance of nature that it still affects us to this day. He fell in love with his sister Demeter’s daughter, Persephone, who did not return his affections. He lured her away from her companions with the beauty of an unusual flower. Once he kidnapped her to his realm, he tricked her into breaking one the rules of the underworld, eating something while she was there, which forced her to remain there.

Demeter’s sorrow was so great that Zeus had to intervene as much as he could. He ruled that Persephone would spend half the year with her mother and the other half with Hades. The months spent with her mother became spring and summer, and the time spent with Hades, became autumn and winter.

Hades is known as being the God of the Underworld in Greek mythology. He was a complex god, and one who plays in important role in many of the stories.