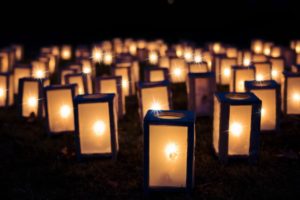 Silent Night is probably one of the most well-known Christmas carols around the world. It has a long and interesting history dating back to the early 1800s. It has been translated into many languages from the original German, including Greek. This is one of the more popular carols that are sung in Greek at Christmas.

Silent Night was composed in 1818 by Franz Xaver Gruber to lyrics written by Joseph Mohr in 1816. Mohr was a young priest at the time in the small town of Oberndorf bei Salzburg, Austria. Franz Xaver Gruber was a schoolmaster and organist in the nearby town of Arnsdorf. The song was first performed in 1818 at St. Nicholas Parish in Oberndorf. Two traveling families of folk singers began including the carol in their shows as early as 1819. The first performance of the song in the US would happen in 1939 in New York City.

During the 1930s the melody of the carol changed slightly to become what we recognize today. The first edition of Silent Night was published by Friese in a collection of Four Genuine Tyrolean Songs in 1833. In 1859, an Episcopal priest in New York City named John Freeman Young published the English translation of Silent Night. Today, the Christmas carol has been translated into about 140 languages, including Greek.

In Greece there is a Christmas Eve tradition where children go door to door singing Christmas carols. They are often invited into the homes they visit to enjoy a snack. In Greek, carols are known as Kalanda or Kalanta. Carols play an important role in Greek tradition, both on Christmas Eve and Epiphany Eve, which takes place on January 5. A variety of carols, including Silent Night, are sung. Caroling has been a tradition in Greece for thousands of years. In Ancient Greece, children would carry small boats and sing songs to honor Dionysius. Still today, many children will still carry small boats as they go caroling.

Here are the Greek lyrics to the popular Christmas carol, silent night:

Two hundred years after Silent Night was first written, it still holds a special place around the world around at Christmastime. The carol has been sung by many recording artists in various genres of music, and people all over the world sing it in English and in other languages if it has been translated.