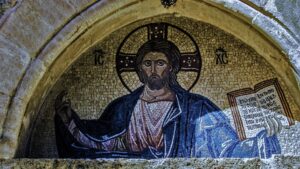 The body of art from the Eastern Orthodox Byzantine Empire is known as Byzantine. The title also applies to nations and states who had a cultural influence from the empire. The Byzantine Empire came to power after the end of the Roman Empire. It lasted until 1453 when Constantinople fell to the Muslims. Here’s more information:

Cultural Influence of the Byzantine Empire

The main subject of Byzantine art was religious and imperial. These two themes were often used in combination with one another, such as with the portraits of Byzantine emperors. These portraits were displayed in the interior of Constantinople’s sixth-century church known as Hagia Sophia. It is believed the reason for the religious and imperial nature of Byzantine artwork is that it’s based on a reflection of the autocratic and pious aspect of Byzantine society. The empire’s wealth and economic structure were in control of the imperial offices and the church. These institutions are the ones who had the most significant ability to commission monumental artistic projects.

Byzantine artists were not interested in creating art in the classical tradition. They often moved toward the more universal and abstract. These artists favored artistic representations that were two-dimensional. Prior to the 13th century CE, it was rare for a Byzantine artist to sign their work. It is believed this happened because artists did not have a high social status. This is especially true of religious icons, which were intentionally abstract.

Byzantine artwork promoted a religious message. Subjects that were often focused on were the need for salvation as well as a reinforcement of faith. These images were created in significant numbers. They were the subject of wall paintings, wall mosaics, icons and more. Some of the most popular artwork was done on painted wooden panels. These were made to be hung on walls or carried. They were made with colored pigments being mixed with wax. It was then burned into the wood as a type of inlay. This is known as the encaustic technique.

Byzantine mosaics can be seen today. They can be found in the church of San Vitale in Ravenna located in Italy or the Hagia Sophia in Turkey. These mosaics show emperors, empresses, holy figures, church officials as well as scenes of everyday life. One of the more popular subjects is agriculture. There were also a significant number of sculpted marble sarcophagi created during the Byzantine era.

Byzantine art also features metalwork. It commonly combined cabochon semi-precious stones with enamel-work. It is considered a Byzantine specialty. The artists created a variety of high-quality jewelry, intricately designed cups and plates as well as all sorts of book covers. Another specialty during this time was boxes for keeping holy relics known as reliquaries.

All Eastern Orthodox churches remain very protective of their artistic traditions. This includes the content and forms of images. This is evidenced by the fact that a modern depiction of the Nativity of Christ is not too different from those developed during the 6th century!