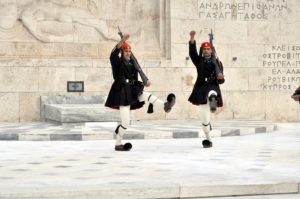 Greece is a country that has enchanted people for centuries. Many are intrigued by the history, culture, and mythology of the country. Many of its destinations, such as the pristine beaches found throughout the country, draw in thousands of visitors a year. Everyone is looking to capture some of the magic that Greece has to offer.

There’s also no secret that there is a lot to do here once you do arrive. It can be so hard to narrow things down! Here’s a look at some of the top things you and your family can do while visiting this country:

Visit the Acropolis in Athens

The Acropolis is one of the most popular and historical attractions in all of Greece. The hill has a history of use predating the Parthenon, which is its most famous landmark. Before the temple to the Goddess Athena was built, it is thought to have been used as a military fortress and even a marketplace.

Today, there are plenty of sites to see on the Acropolis and it is a must-see tourist attraction. While here, you can see sites such as the famous Parthenon, the Sanctuary of Zeus, the ancient marketplace (agora), and an ancient theater. In fact, there’s so much to see and do here that you might want to take a guided tour so you can take it all in.

Santorini is considered one of the most popular Greek Island destinations to visit in the world. It’s located on the southern side of the Aegean Sea. The history behind the Santorini caldera is that it was miraculously formed by a massive volcanic eruption in 17 B.C. The landscape on the island is also unique and showcases the turbulent, volcanic history on the island. While here, be sure to visit one of the unique beaches, watch the sunset, and enjoy some of the island’s many museums, such as the Archaeological Museum of Thera.

One of the things Greece is known for is its gorgeous beaches, which have drawn people for centuries. Islands such as Mykonos, Santorini, and Crete have plenty of choices for those looking for some unique beachside experiences. However, there are beaches located throughout the country that you won’t want to miss. Some top beaches in Greece include Super Paradise Beach in Mykonos, Kamari Beach in Santorini, Elafonissi Beach on Crete, and Aegeon Beach near Athens. Most beaches in Greece are also family friendly.

Greece is also known for its unique and healthy cuisine and no trip to the country would be complete without sampling some of the foods. While visitors may recognize standard Greek foods found throughout the world, such as gyro and dishes such as moussaka, saganaki, and dolmades, there are plenty of other options as well! Greece is famous for having some of the freshest seafood in the world, especially when visiting the coast. Grilled Octopus, Pan fried fresh fish, and Greek lobster are only a few of the delicacies you’ll find in Greece. No matter where you go and what foods you try, rest assured that most restaurants will also make a “toast,” – the Greek version of a grilled cheese sandwich – for any youngsters that might not fully appreciate the assortment of tastes at their fingertips!

As you can see, there are plenty of things for families to see and do while in Greece. Each of these is definitely worth experiencing while on vacation here!